Sedona AZ (April 29, 2016) – The Sedona International Film Festival is proud to partner with the Mental Health Coalition Verde Valley to present the encore of the award-winning film “Reparation” showing Thursday, May 12 at 4 and 7 p.m. at the Mary D. Fisher Theatre. The premiere is one of the kick-off events of Mental Health Month.

“Reparation” won the Audience Choice Award for Best Feature Drama at the recent Sedona International Film Festival. It played to sold-out shows and rave reviews and is returning by popular demand for this special event. There will be a post-film discussion at both screenings.

A troubled Air Force veteran finds clues to his buried memories in his daughter’s art, while confronted by a stranger looking for answers of his own. “Reparation” is a powerful new psychological thriller that delves deeply into how a family copes with the past, what really defines human bonds, and the common struggle to find balance. 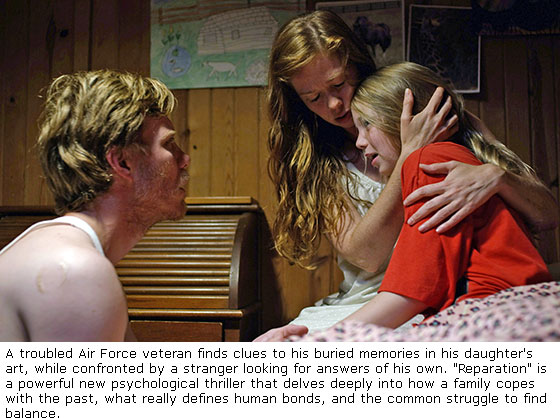 The story swirls like a funnel cloud around Bob Stevens, a small-town, Indiana farmer with a three-year hole in his memory. When a mysterious stranger claims to have been his best friend in the Air Force Police, Bob’s peaceful existence begins to unravel from the outside in. His entire family is caught in the storm, but none more than his eight year-old daughter who discovers that she has inherited her father’s missing years … stowaways on her DNA.

As Charlotte comes to learn, “balance is everything.” That universal theme of balance is the soul of Reparation, a timely film that illuminates the issue of veterans living with post-traumatic stress in a thrilling new way.

Darlene Pagnucco (mother of a Navy Seal) and John Soderberg (Sculptor and Artist) will lead a discussion about their personal experiences with Veterans and the impact of PTSD and trauma on families. In addition, there will be a Skype conversation with the filmmaker, Kyle Ham (writer/director/producer).

“Reparation” will show at the Mary D. Fisher Theatre on Thursday, May 12 at 4 and 7 p.m. Tickets are $12, or $9 for Film Festival members. For tickets and more information, please call 928-282-1177. Both the theatre and film festival office are located at 2030 W. Hwy. 89A, in West Sedona. For more information, visit: www.SedonaFilmFestival.org.