Stravinsky’s “Rite of Spring” received its U.S. premieres in both staged and concert versions in Philadelphia under the direction of Leopold Stokowski. Now, in a first-of-its-kind partnership with Philadelphia Live Arts, The Philadelphia Orchestra collaborates with the New York-based Ridge Theater Company to present a 21st- century treatment of “The Rite of Spring” with dancers, video projection, and theatrical lighting. Philadelphia also gave the first American performances of Ravel’s Piano Concerto in G, which will be performed by star soloist Jean-Yves Thibaudet. The concert will begin with Richard Wagner’s overture Siegfried Idyll. 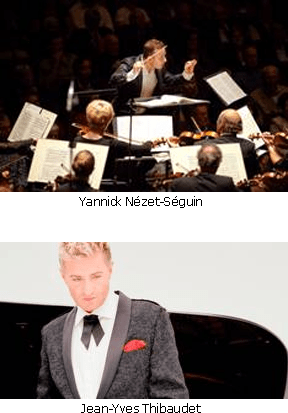 Jean-Yves Thibaudet — of French and German heritage — began his piano studies at the age of five and gave his first public appearance when he was seven. At twelve, he entered the Paris Conservatoire, where his teachers were Aldo Ciccolini and Lucette Descaves, a friend and collaborator of Ravel. He won the Conservatoire’s premier prix at 15 and three years later won the Young Concert Artists Trust auditions in New York. Since then, Thibaudet has performed regularly throughout Europe, North America, Australia and the Far East, collaborating with virtually every major orchestra and conductors such as Alsop, Ashkenazy, Blomstedt, Chailly, Dutoit, Gergiev, Levine and Tilson Thomas. Equally at home in chamber music, recitals and the orchestral repertoire, he has appeared and recorded with artists including Cecilia Bartoli, Brigitte Fassbaender, Renée Fleming, Dmitri Hvorostovsky, Angelika Kirchschlager, Yuri Bashmet, Joshua Bell, Truls Mørk and the Rossetti String Quartet.

Ridge Theater has established itself as one of America’s premiere creators of multimedia theater, opera, and new music performance. Ridge productions are epic visual and aural works that typically position performers within film and video projections, redefining traditional theatrical boundaries. Dramatic staging by acclaimed director Bob McGrath and haunting film work and projections by the filmmaker Bill Morrison (“Decasia”) and the visual artist Laurie Olinder are hallmarks of the Ridge style.

The Philadelphia Orchestra, “˜Those Fabulous Philadelphians” as they are known to many, will be shown at the Mary D. Fisher Theatre one day only: Sunday, March 24 at 2:30 p.m. Tickets are $15, or $12.50 for Film Festival or Chamber Music Sedona members. Tickets are available in advance at the Sedona International Film Festival office or by calling 282-1177. Both the theatre and film festival office are located at 2030 W. Hwy. 89A, in West Sedona. For more information, visit: www.SedonaFilmFestival.org.