Sedona AZ (March 15, 2018) – Renowned entertainer, Aspen Hall of Famer and former owner of the Crystal Palace Restaurant in Aspen, Colorado, Mead Metcalf — “The Music Man” — is performing one night only: Friday, March 23 at 7 p.m. at the Mary D. Fisher Theatre in West Sedona.

For five decades, the Crystal Palace was known for cutting-edge political and social satire. Metcalf is planning on bringing a little of that and a whole lot of music to this very special show in Sedona.

Metcalf’s show will feature his trademark political satire interspersed with songs from Cole Porter’s “Kiss Me Kate” and several by mathematician Tom Lehrer, which were frequently performed at Metcalf’s Dartmouth College in New Hampshire every February during Winterskol Weekend. 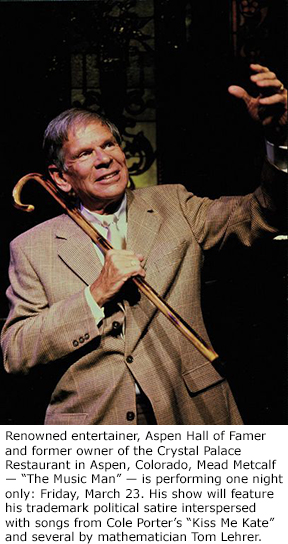 Metcalf opened the Crystal Palace in downtown Aspen, Colorado in summer of 1957 in the small Mother Lode Building and moved next door to the corner of Hyman and Monarch Streets in 1960. In this building, he created a horseshoe balcony, hung an entire wall of stained glass, added back-lighting for atmosphere along with three large 9-foot crystal chandeliers from New Orleans. And that is how his show began.

Originally, the program was mostly Broadway excerpts; however, it gradually became political satire created by Metcalf’s friends Lesley Perrin and Rick Crom, both from New York.

In this Sedona show, Metcalf will also perform songs and satire by Cary Hoffman and Ira Gassman, as well as one from Morrie Bobrow, a lawyer in San Francisco.

It promises to be a joyful evening of song and political satire with lots of laughs and plenty of outrageous fun! Like their days at the Crystal Palace, this show promises to be irreverent to all sides of the political spectrum, so all are invited to come with an open mind and open heart.

“Mead Metcalf: The Music Man” will perform at the Mary D. Fisher Theatre on Friday, March 23 at 7 p.m. Tickets for the show are $15 general admission and $13 for film festival members. All tickets include a meet-and-greet with Metcalf and his wife Diane in the lobby after the show.