Sedona AZ (March 20, 3014) – Join us March 28–30, 2014 at Sedona Arts Center to honor Sedona artist Ed Jaskulski in a unique exhibit, “Renaissance Man at 100.” Ed’s impressive collection of works will be on display for 3 days only in the Special Exhibition Gallery at Sedona Arts Center in Uptown Sedona from 10 a.m. to 5 p.m. daily, with a special opening reception Friday March 28, 5–6:30 p.m. 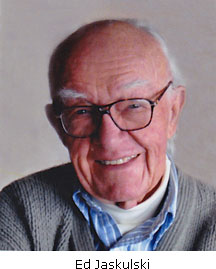 Ed Jaskulski was born in Easthampton, Massachusetts, on October 9, 1913. He studied at the Art Students League and the Juilliard School of Music in New York City and served in the Navy Seabees for three years during World War II as a photographer. During this time, he was stationed in the Pacific—the Treasury Islands and Okinawa—where he documented the war by taking extensive photographs which the U. S. Library of Congress has included in their permanent collections. After the war, Ed worked for the premier portrait photography studio, Fabian Bachrach, in New York City, where he photographed presidents, kings and moguls.  His outstanding photographs of Richard Nixon, Malcolm Forbes, Leonard Bernstein, King Faisal, Marshall Tito, Lee Iacocca, Indira Ghandi, and many others, are included in the special exhibit “Renaissance Man at 100.”

Ed and his beloved wife Amelia, who died last year at 91, retired to Sedona in 1987, where they both became deeply involved in community affairs and helped shape the cultural essence of Sedona.  Ed continues to be active in Sedona Arts Center, Chamber Music Sedona, and the local Great Books Discussion Group. Ed Jaskulski has lived more than a fourth of his illustrious one hundred years in Sedona, enriching the vibrant art life here as well as the lives of all who know him.

The Sedona Arts Center is located at State Route 89A & Art Barn Road in uptown Sedona. The Galleries are open daily from 10 a.m. to 5 p.m. For more information call 928-282-3809 or visit SedonaArtsCenter.org.