Sedona AZ (March 19, 2014) – On the southern end of the Creekside Plaza parking lot in Sedona is an old stone pumphouse listed on the historic register of places.  The third year of readings conducted by the Pumphouse Poetry and Project is about to begin.  Once again a wide variety of wonderful authors will read from the steps of the old stone pumphouse, in the shade of the giant sycamore trees and within whispering distance of the creek.  The third season of readings will begin on Friday, March 28th, from 5- 630 with Allen Woodman reading humorous love stories. 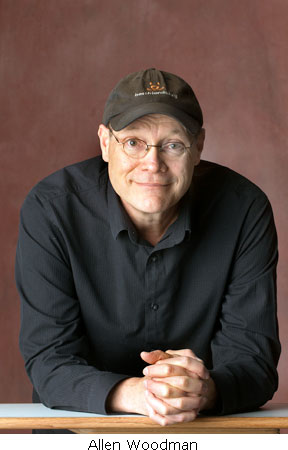 Allen Woodman has published six books of fiction, including Saved by Mr. F. Scott Fitzgerald, a collection of humorous short stories for adults, and The Cows Are Going to Paris, a children’s picture book (w/David Kirby, selected for Doubleday and Literary Guild Book Clubs).  He has published scores of short stories in magazines and anthologies, including Flash Fiction, Micro Fiction, Sudden Fiction Continued (Norton), Flash Fiction Funny, Mirabella, Washington Post, Passages North, and Story. His stories have been nominated for Best American Short Stories and the Pushcart Prize series, and he has been awarded grants from the Arizona Arts Commission and the National Endowment for the Arts. His stories have been heard on NPR’s Selected Shorts and at Symphony Space (NYC), and an interview with the author appeared on Books & Co. (PBS). He teaches creative writing at Northern Arizona University.

After concluding their 2nd season with Arizona’s first poet laureate, Alberto Rios, making his first public appearance as poet laureate at the Sedona library for the Pumphouse Poetry and Prose Project award ceremony, the Pumphouse sponsors; Elizabeth Oakes, Cocopah North, and Gary Every were eager to launch a third season of the popular reading series and believe that starting this year with the entertaining Mr. Woodman will get the season off to a wonderful start.  Every Pumphouse show includes an open mic – but readers are encouraged to keep their pieces to 3 minutes or less.

Pumphouse Poetry and Prose Project regulars will want to note that this year’s shows begin at a new time 5 o’clock, but rest assured the readings are still held in the southern end of the Creekside Plaza parking lot, on the steps of the old historic pumphouse in the shade of the sycamore trees and within whispering distance of the creek.  The show on Friday, March 28th will be closed by local musician Ron McClain.  Mr. McLain has been a well-known fixture on music stages across the Verde Valley for many years.  He has entertained crowds with smooth performances, featuring rhythmic guitar and sultry vocals.  He plays a mean harmonica too.