Cottonwood AZ (March 15, 2016) – On March 10, 2016, just before 11PM, a YCSO deputy stopped an older model station wagon on Western Drive near Highway 260, Cottonwood, for a registration violation. The driver was identified as 32-year-old Brandi Name from Cottonwood. She had a male passenger in the vehicle that provided the name ‘Cody Montano’ with a birthdate in 1994. Upon initial questioning, both subjects denied there were any firearms in the vehicle.

A check of Name’s driving record indicated her license was suspended and she was arrested. An assisting deputy had arrived and while speaking with the male passenger, he noticed a plastic ‘bindle’ baggie in the ash tray which he recognized as a common package used carry illicit drugs. The passenger was detained and continued to give the name ‘Cody Montano’ and indicated he had been issued a California ID card. The deputy requested a name check from YCSO dispatch which returned ‘no record found.’ The passenger was unable to recall his SSN. Name also claimed her passenger’s last name was ‘Montano.’ 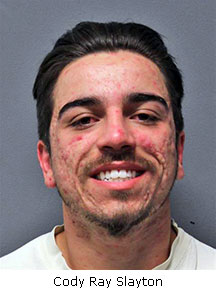 The passenger was again confronted about his identity and now claimed he might have a warrant but refused to supply further information. When the deputy checked his wallet, jail paperwork with the name ‘Cody Slayton’ and a date of birth in 1995 was found. Booking photos of Slayton confirmed the passenger’s true identity. A records check under the name returned with a Probation Violation warrant issued out of Yavapai Superior Court. Slayton was under ‘intensive’ probation supervision and admitted to using marijuana and methamphetamine recently. Slayton was arrested regarding the warrant.

During a check of the vehicle, deputies located a backpack on the passenger floorboard. Inside, deputies found a .38 caliber pistol, a bindle containing methamphetamine and a tightly rolled dollar bill used to snort meth. Slayton admitted to possession of all these items.

Slayton was booked at the Camp Verde Detention Center on his probation warrant and charges including Possession of Dangerous Drugs/Paraphernalia and Weapons Misconduct-Prohibited Possessor. He remains in-custody without bond. Name was booked for Driving Suspended and later released on bail.