Sedona AZ (November 24, 2015) – On December 5th and 6th, The Phoenix Ballet and Sedona Chamber Ballet celebrate the holidays with Slawomir Wozniak’s  breathtaking production of The Nutcracker.  Let the professional dancers awe you with their skill while they dance alongside nationally renowned students that have brought home top awards and honors at national and international competitions including Youth America Grand Prix, the World Ballet Competition, the Dance Awards, USA International Dance Competition and more.  Danced to Tchaikovsky’s famous score and held at the Sedona Performing Arts Center, let this magical, authentic production transport you back in time. Complete with dancing mice, a snowfall on stage and the beauty of the Sugar Plum Fairy, it’s a sight to cherish. Let the holidays begin and see why audiences have been raving about Phoenix Ballet! 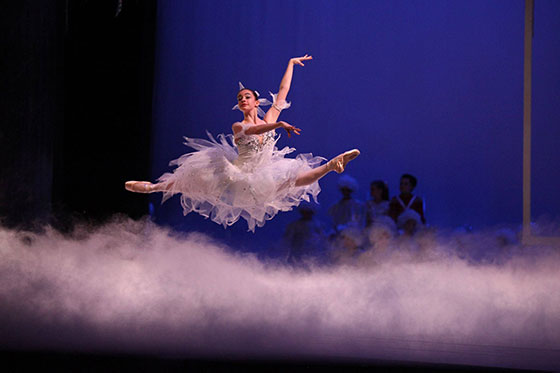 Phoenix Ballet will give 3 performances at Sedona Performing Arts Center.   Tickets may be purchased by  logging on to www.sedonachamberballet.org.

Phoenix Ballet is thrilled to present Alice Stroming, of the Ballet Theatre of Harlem as the Waltz Queen.  Accepted to The School of American Ballet  at the age of nine, Alison Stroming performed many children’s roles with the New York City Ballet in numerous productions. She attended the American Ballet Theater Summer Intensive in New York in 2004 where Franco De Vita, offered her a full scholarship to the new Junior Division where she continued her training. Alison toured with The American Ballet Theater II in Europe in 2010 and 2011.. Ms. Stroming was the recipient of the Dizzy Feet Foundation Scholarship in 2010. She danced for two seasons with the Alberta Ballet in Canada and most recently with Ballet San Jose under the direction of Jose Manuel Carreno where she performed works by Dwight Rhoden, Twyla Tharp, Ohad Naharin, George Balanchine, and Igal Perry. This will be her first year with the Dance Theatre of Harlem.

This production will also feature Sophia Lucia as the Doll as well performing in Snow and Waltz of the Flowers. Sophia has appeared on a number of television shows besides Dance Moms, including: Dancing with the Stars,America’s Got Talent, Shake It Up, The Ellen DeGeneres Show, Home & Family, Kirby Buckets, X-Factor, So You Think You Can Dance: Ukraine, and Ricky Nicky Dicky and Dawn. She was featured in Fox Legacy’s Shirley Temple. She has appeared in commercials for McDonald’s, Old Navy, and Party City. Sophia has also modeled for Pearl Yukiko and Discount Dance Supply, been a spokesperson for Capezio, and works with California Kisses in releasing her own dancewear line.

On March 30th, 2013, Sophia was filmed performing fifty-five consecutive pirouettes, and presented with a certificate from the Guinness Book of World Records.  In 2015 Sophia joined the Phoenix Ballet Company.

Phoenix Ballet’s performances of The Nutcracker in Sedona are generously supported through grant money from The City of Sedona, the SPAC Community Arts Funds and the Sedona Lodging Council.