Over the past several months, P.A.N.T. Detectives began receiving information regarding 52 year-old Bryan Ritter of Cornville and his reported involvement in the use and possession of illegal drugs among other crimes. Detectives developed probable cause and obtained a search warrant for Ritter’s residence and various drug-related crimes. At approximately 5:00 PM, P.A.N.T. Detectives and personnel from the Yavapai County Sheriff’s Office and Cottonwood Police Department served a search warrant on Ritter’s residence.

During the search, Detectives contacted Ritter, along with 27 year-old Misty Esler and 55 year-old Johanna Johnson, all from Cornville, inside the residence. Detectives found numerous hypodermic syringes, several grams of heroin, nearly half an ounce of methamphetamine (approximately 10+ grams), scales, empty plastic baggies, tin foil with burnt residue, glass bongs and other related drug paraphernalia in the residence. 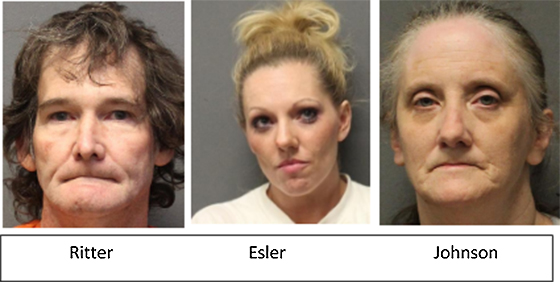