Cottonwood AZ (June 24, 2020) – During the middle of May, detectives from the Partner’s Against Narcotics Trafficking task force developed information regarding the sale of fentanyl pills from a motorhome parked on property in the 2400 block of South Cedar Lane, Cottonwood. Detectives verified a high volume of traffic at the location. Over the next few weeks, the investigation continued and specific individuals were identified who were involved in the drug sales.

Based on the information gathered during this time, detectives sought and obtained a search warrant for the motorhome. On June 22, 2020, around 8:30 PM, the warrant was served and 3 persons were detained inside the motorhome including 24-year-old Alec Ramsey, 23-year-old Areanna Newhall and 33-year-old Jimmie Treakle. All are from Cottonwood.

When Newhall was contacted, she was seen with her hands inside her waistband. A subsequent search revealed a zip-lock baggie containing 259 fentanyl pills – see photo. Ramsey was detained and found with a quantity of methamphetamine on his person. Treakle was also detained. Detectives found additional fentanyl pills and some methamphetamine along with associated paraphernalia throughout the motorhome. 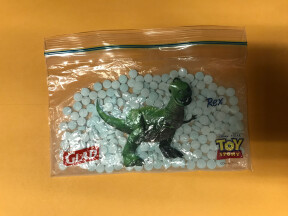 Newhall acknowledged ongoing sales of fentanyl for the last couple of months with Ramsey. Pills were purchased in the Phoenix area and she would use her unemployment pay and money provided by Ramsey to make those purchases. Newhall admitted concealing the baggie of fentanyl pills when detectives entered the motorhome.

Ramsey denied selling drugs. Treakle claimed he was just visiting the pair and had used fentanyl while inside the motorhome.