Camp Verde AZ (June 9, 2016) – On June 4th 2016, acting on information provided by the Camp Verde Marshal’s Office, the Partners Against Narcotics Trafficking Task Force facilitated the arrest of two suspects who were in possession of a large quantity of methamphetamine.

P.AN.T. Detectives and the Yavapai County Sheriff’s Office K9 teams began surveillance in the Camp Verde area looking for a Silver SUV type vehicle. The vehicle was driven by 21 year-old Victor Barrera-Gutierrez from Phoenix and he was accompanied by his 16 year-old juvenile male passenger. 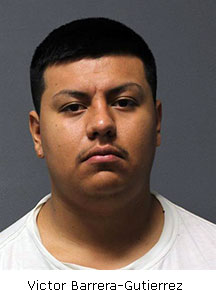 Once the vehicle was located, YCSO K9 team(s) received an alert and approximately 5 lbs. of methamphetamine was found inside a Tupperware container during a subsequent search. The methamphetamine seized has an estimated street value of over $225,000 dollars.

Both suspects were taken into custody without incident and booked in at the Yavapai County Adult and Juvenile Detention Centers, respectively.  They were charged with multiple felony charges including Possession of Dangerous Drugs for Sale, Transportation of Dangerous Drugs for Sale, Involving or using minors in drug offenses and Participating in a Criminal Syndicate. Barrera-Gutierrez remains in-custody on a $100,000 bond.