Sedona AZ (April 26, 2018) – The National Theatre of London continues its season with its acclaimed production of the comedy “Young Marx” showing in Sedona on Sunday, May 6 at 4 p.m. The Sedona International Film Festival hosts the big screen premiere at its Mary D. Fisher Theatre.

Rory Kinnear is Marx and Oliver Chris is Engels in this new comedy written by Richard Bean and Clive Coleman. Broadcast live from The Bridge Theatre, London, the production is directed by Nicholas Hytner and reunites the creative team behind Broadway and West End hit comedy “One Man, Two Guvnors”. 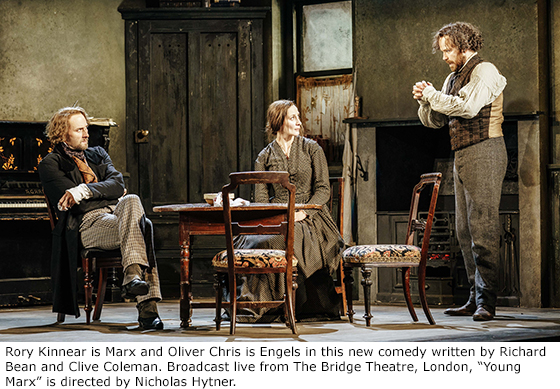 Creditors, spies, rival revolutionary factions and prospective seducers of his beautiful wife all circle like vultures. His writing blocked, his marriage dying, his friend Engels in despair at his wasted genius, his only hope is a job on the railway. But there’s still no one in the capital who can show you a better night on the piss than Karl Heinrich Marx.

“Rory Kinnear is on glorious form in this fast-paced comedy.” — Independent

“A seriously clever comedy. Riotous fun. A delicious blend of braininess and bounce.” — The Times

“Young Marx” will be shown at the Mary D. Fisher Theatre on Sunday, May 6 at 4:00 p.m. Tickets are $15, or $12.50 for Film Festival members. Tickets are available in advance at the Sedona International Film Festival office or by calling 928-282-1177 or online atwww.SedonaFilmFestival.org. Both the theatre and film festival office are located at 2030 W. Hwy. 89A, in West Sedona.