Sedona AZ (February 8, 2012) – “Mountain Lions” will be the featured topic at Keep Sedona Beautiful, Inc.’s Preserving the Wonder™ Speaker Series on Wednesday, February 15. The evening will begin with complementary offerings of local wine (donated by Norris and Carolyn Peterson) and El Rincon appetizers at 5:30 pm. The talk will begin at 5:45 pm.

The presenter, Lee Luedeker, has been with the Arizona Game and Fish Department for over 38 years where he has been Wildlife Manager since graduating from Texas A&M University in 1973 with a BS in wildlife biology. Annually, he responds to approximately ten mountain lion incidents within the greater Sedona area. Lee is assisted by his wife, Rouchelle, who participates by nursing assorted orphaned or in-need wildlings back to health, most recently a day old javelina and an injured raven. 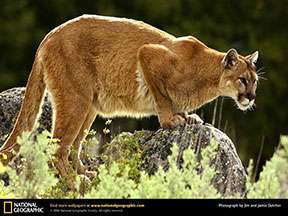 According to the Arizona Game and Fish website, the mountain lion occurs only in the western hemisphere and has one of the most extensive ranges of any land mammal. Also called cougar, puma, catamount, and panther, it is the largest native cat in North America. These animals are specialized top predators that stalk and ambush their prey. They prefer to hunt in steep, rocky terrain and from high vantage points. Mountain lions are not endangered or scarce in Arizona. Biologists estimate the current statewide mountain lion population to be between 2,500 to 3,000 animals and consider it stable to growing. The species is found throughout the state, but it is most abundant in areas where its major prey species, deer, are present. Loss of habitat from human development represents the single largest threat to conservation of mountain lions in Arizona.

Keep Sedona Beautiful welcomes the community and visitors alike to its free monthly Preserving the Wonder™ Speaker Series, which takes place at its historic Pushmataha Center on 360 Brewer Road in Sedona. Held the third Wednesday each month from September to June, typically beginning at 5:30 pm with wine and appetizers, the award-winning series presents an interesting diversity of programs relevant to the unique environment of our region. Keep Sedona Beautiful, Inc. is a nonprofit organization that, by acting through the stewardship of its members and volunteers, is committed to protecting and sustaining the unique scenic beauty and natural environment of the Greater Sedona Area. For more information about Keep Sedona Beautiful, please call 928.282.4938.