Sedona AZ (January 18, 2015) – Kenya elephants and Masaai culture were passions of Lynne Leakey, a long-time Sedona resident and a leading  Africa tour guide for 40+ years, before she passed away suddenly while on safari last summer.

She had been planning a July, 2015 safari especially designed for Sedona residents.  You can experience vicariously what Lynne had in mind at a tribute to her life and work, put together by some of her closest  Sedona friends, on Friday, January 23 at the Yavapai College Sedona campus, room 34 (on Cultural Park Rd, across Rte 89A from Red Rock High School).   The program will begin  at 11:30 a.m., with doors opening at 11:00.

A dramatic video of Lynne describing her unique approach to safari leadership will be shown, along with the best photographs Lynne took of wildlife and the Masaai people in Africa.   Also, Lynne’s friends will share their own stories and photos of their travels with her. 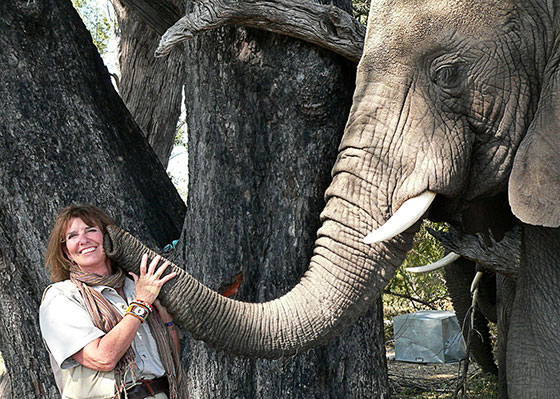 As a child, Lynne first became enamored with elephants through behind the scenes activities at the Los Angeles Zoo and numerous viewings of the movie “Born Free”.   She read the work of Louis Leakey, Diane Fossey and Jane Goodall, and she dreamed of meeting and working with them.  Her dream became reality in 1969 when she moved to Africa and eventually studied with all three.

Africa became the “home of her heart.”   Her brief marriage to Philip Leakey,  of the family well-known for paleontology,  started her on a long career of serving as a naturalist, safari guide, and lecturer on the wildlife, ecology, and tribal life  of East Africa.   She also was a strong advocate for several elephant support and anti poaching organizations.

Lynne once said, “Promoting conservation is the main reason I do these tours. Millions of dollars come into Africa from people who want to see these animals.  The animals go, so do the tourists…A strong tourist industry which provides jobs and foreign-exchange is one of the most effective ways of preserving wildlife and game parks for the future.”

Locally, Lynne supported the care of homeless animals through Tara’s Babies Animal Welfare and was a founding member of Friends of Conservation (FOC).

Wherever she went, Lynne lived life to the fullest and inspired countless people to care more for wildlife, each other, and the environment.