Cottonwood AZ (March 9, 2016) – The Los Angeles based New West Guitar Group comes to Old Town on Saturday, March 19th  for a special concert at Old Town Center for the Arts at 7:00 pm.

The New West Guitar Group (NWGG) has developed a wide spread reputation as one of the premier guitar ensembles in the world. NWGG performs classic pop covers, jazz standards and exciting originals. Their signature sound comes from an innovative style that highlights rhythm, beauty and virtuosity through combining acoustic and electric guitars. Smith and Storie founded the group 10 years ago and today they continue to tour as a trio with Brahm throughout the United States and abroad. 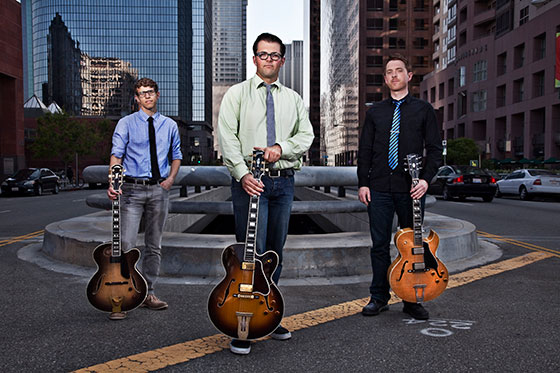 Praised as “sharp and refined” by the Seattle Times, the New West Guitar Group has released five instrumental albums over the last 10 years. Each project features their unique style of laid-back virtuosity through expert arrangements crafted by the members of the group. Their music is regularly featured on NPR and jazz radio stations, while their repertoire is performed throughout the country by college and high school guitar programs. Graduates of USC’s Thornton School of Music, the New West Guitar Group’s versatility as players and composers have given them a reputation as pioneers in the realm of guitar ensemble.

Over the years, New West Guitar Group has piled up numerous awards and accolades, and has enjoyed broad international exposure. Before they even finished school at USC, they were the first group to receive the coveted Thornton Protégé Grant. During this same period, the Los Angeles Sister Cities Committee honored the group as musical ambassadors of L.A. – which in turn created the opportunity for them to perform at the 2005 World Expo in Nagoya, Japan, and the 2007 German-­American Volksfest in Berlin. They have continued to perform in major venues throughout the U.S. and Canada, Europe and Asia.

Here’s a unique opportunity to hear this award winning guitar ensemble in the ambient vintage elegance of Old Town Center for the Arts.  Come see them for a one night only performance on Saturday, March 19th, 7:00 pm.

Tickets for The New West Guitar Group are $18 in advance, $20 at the door, and $25 priority seating.  Tickets are available online at www.showtix4u.com, in Cottonwood at Desert Dancer, and Mount Hope Natural Foods; and in Sedona at Local Juicery.  Old Town Center for the Arts is located at 633 N. 5th Street (5th Street & Main) in Old Town Cottonwood. For more information please visit oldtowncenter.org or call Elena Bullard at 928.634.0940.