Juveniles Playing with Matches Results
in a Home Destroyed by Fire

Sedona AZ (April 26, 2016) – On April 23, 2016, at approximately 3:15 PM, deputies were dispatched to a fire in the 200 block of East Cortez Drive, Village of Oak Creek. Once on scene, deputies noted that fire crews were doing an amazing job trying to contain the fire while battling very strong winds.

Deputies were told by witnesses that the fire started in a wash area below the street and eventually spread to a home. The witnesses also indicated several children were playing in the wash area where the fire originated and suspected their involvement. At the conclusion of the incident, one home was nearly destroyed.

Deputies and detectives from the Criminal Investigations Bureau have concluded the following so far: 8, 11, and 12-year-old boys, along with a 13-year-old girl, found a lighter and were igniting cotton from the cottonwood trees in the wash area near East Cortez Drive. They also lit some piled sticks and as the wind picked up, nearby grasses caught fire which then spread to trees on the hillside. 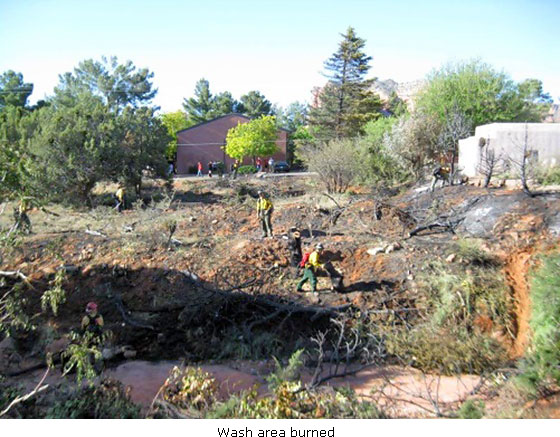 At this point, it appears embers from one of the trees landed on the roof of a Rimrock Drive home. This particular home had a flat roof containing a lot of plant and leaf debris which eventually ignited the structure itself. Although the fire was contained to this home, the home itself was nearly a total loss. There was some damage to adjacent property due to residual heat from the fire. No injuries were reported. 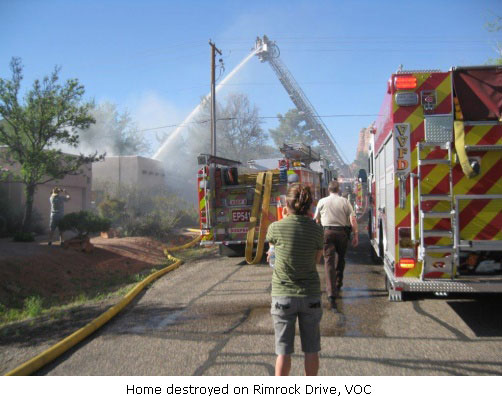 With the aid of neighbors, the 4 juveniles were identified, located and detained by deputies on scene. Following interviews with detectives, the subjects were eventually released to the custody of their respective parents pending a Reckless Burning criminal complaint.