Head on Collision sends 3 to the Hospital

Cornville AZ (November 4, 2015) – On November 4, 2015, at approximately 7AM, YCSO deputies were dispatched to a head on collision on Cornville Road between Page Springs Road and Beaverhead Flat Road, Cornville. A black over white 2011 BMW Mini Cooper, driving west on Cornville Road, crossed over the center line and collided with a red 2015 Hyundai sedan travelling in the east bound lane. A third vehicle, described as a silver 2005 Acura, veered off the roadway to avoid the collision and crashed into the guardrail. 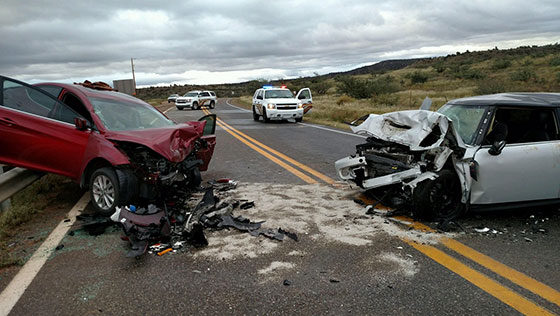 The initial investigation indicates that the BMW, driven by 19-year-old Julian Dallen from Cottonwood, crossed into oncoming traffic after he fell asleep. Dallen’s 17-year-old brother was a passenger in the vehicle. Dallen sustained a broken right arm and leg along with facial cuts and was admitted to a local hospital. His brother received minor injuries and was treated at a local hospital. The driver of the Hyundai sedan, a 41-year-old Rimrock resident, had no time to avoid the wrong way driver and was injured following the collision. She suffered several broken bones and was transported to the Flagstaff Medical Center in serious condition for expected surgery. The driver of the Acura, a 57-year-old female and resident of Sedona, was apparently not injured.

Dallen was cited for Failure to Drive in the Proper Lane and Causing Serious Physical Injury during a Moving Violation.

The investigation remains active. Indications of vehicle speeds were not available as of this writing.

Cornville Road was closed for approximately (3) hours as Fire personnel worked to stabilize those injured. The Yavapai County Road Department then worked for more than an hour to remove fluids from the roadway and temporarily repair the damaged guardrail.