Guitarist and Irish singer John Freeman will be performing at the Mary D. Fisher Theatre on March 17

After last year’s sellout crowd at the Mary D. Fisher Theatre, John Freeman is back for his second annual performance of Irish songs, stories and humor. This year he is adding some old Gaelic songs. These are done in English but are known to lovers of traditional songs from that part of the world.

“Of course, I will be doing all the old favorites like ‘Danny Boy’ and ‘Galway Bay’ to name a few,” says John. “These are what people like to hear around Saint Patrick’s Day”. 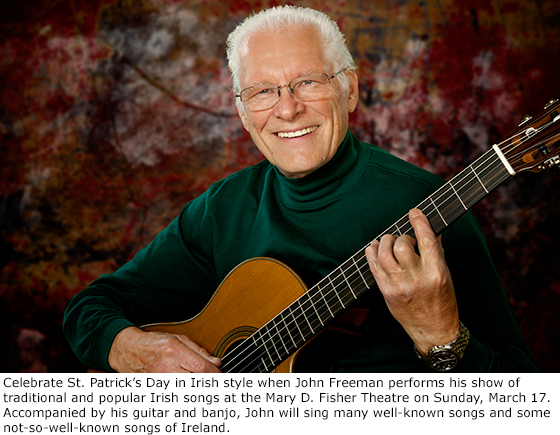 When John performed in the Midwest, audiences use to request the same songs every night, so he has a good idea of what people like.

“I will be doing a few songs where people will say ‘I didn’t know that was Irish’!”

Many popular Irish songs actually originated in Scotland and came over to Ireland in the seventeen hundreds. The funny thing is, you cannot find one recording of these songs by a Scotsman but hundreds by Irish groups.

You will hear stories of John’s life in Ireland in the 1960s. Although it was only a couple of hundred miles from his home in England it was a whole new world with different customs and different sayings.

“Our histories were intertwined but we had many different ways of looking at it. Very much like one of us going down deep into Mexico for the first time and talking about our joint histories,” added John.

“John Freeman: An Evening in Ireland” will be performed at the Mary D. Fisher Theatre on Sunday, March 17 at 7:30 p.m. Tickets for the show are $15 general admission and $13 for film festival members. All tickets include a meet-and-greet with John in the lobby after the show.