Prescott AZ (February 5, 2016) – On February 3, 2016, 45-year-old Marla Davis was arrested for felony charges including 2 counts of Inducing Witness to avoid Testifying and 3 counts of Threatening to Cause Physical Injury. Davis was booked at the Camp Verde Detention Center and remains in-custody. Bond has not been set as of this writing.

In recent weeks, PANT detectives developed information that Davis was involved in a plan to intimidate witnesses related to her previous arrest on January 8, 2016, on several drug charges. The information was investigated and evidence obtained to substantiate the allegations. 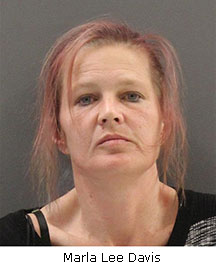 Detectives are asking anyone with additional information regarding the activities of Davis in light of the current and prior charges to call YCSO at 928-771-3260, or Yavapai Silent Witness at 1800-932-3232. If you have information about those employed in the field of guidance drug counseling/rehabilitation who may be engaged in similar activity, detectives would like speak with you also. If you wish to remain anonymous, please contact Yavapai Silent Witness.

Davis admitted using methamphetamine a couple of days prior and acknowledged selling drugs on occasion to ex-clients from the guidance clinic.

The investigation into Davis’ actions remain ongoing and detectives are encouraging anyone who may have had contact with her, or has specific knowledge of these activities, to please call YCSO at 928-771-3260 or Yavapai Silent Witness at 1800-932-3232.