His actions caused the grounding of fire-fighting aircraft, placing hotshots in danger while protecting structures

Prescott AZ (July 2, 2017) – Between June 24th and 28th, 2017, 54-year-old Gene Alan Carpenter from Prescott Valley committed the following offenses in the area of the Goodwin Fire:

ENDANGERMENT per A.R.S. 13-1201.A – Carpenter recklessly endangered 14 aircraft/aircrews and associated ground fire crews with a substantial risk of imminent death or physical injury by flying an unmanned drone aircraft in closed airspace above an active fire area during the Goodwin Fire in Mayer Arizona.

UNLAWFUL OPERATION OF AN UNMANNED AIRCRAFT per A.R.S. 13-3729.A.2 – Carpenter knowingly operated an unmanned aircraft in an active fire area which interfered with firefighting operations. 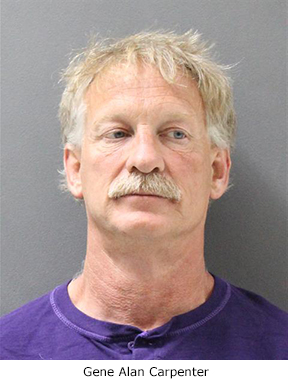 The investigation – On June 24, 2017, just before 7PM, a witness reported contacting a male subject flying a drone while standing near a white van on East Poland Road, near the Mount Union Lookout tower. US Forest Service personnel inside the Mt. Union Lookout tower also reported seeing a white van and a man flying a drone at the same time. (See photo later obtained during the investigation). It should be noted the initial report of the fire in that area was called in at approximately 4 PM and aircraft began flying within about 30 minutes. Deputies developed leads identifying Carpenter, based in part, on prior contacts.

Additional reports of a drone operating in the vicinity of the fire were received throughout the week.

Another witness reported seeing a male subject matching Carpenter’s description standing next to a white van on Iron King Mine Rd, Tuesday, June 27, 2017. This witness saw a drone in the back of the van. 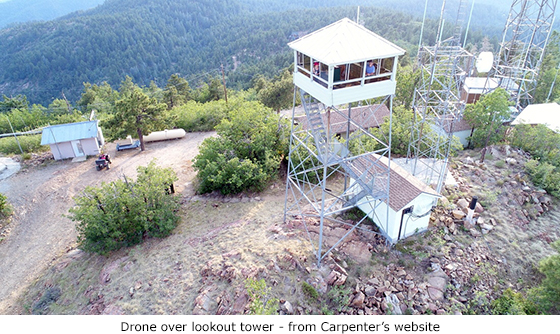 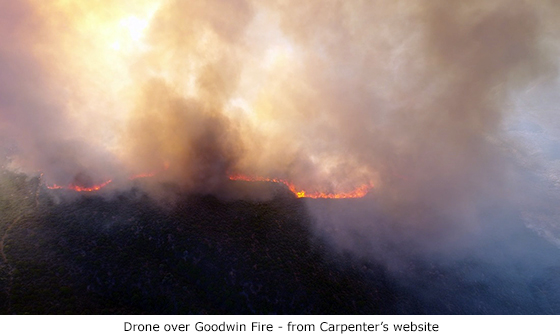 On June 30, 2017, a YCSO detective spoke with an Air Attack Pilot supervisor for the Goodwin Fire. The supervisor stated that on June 28, 2017, his job was to maintain control of all the aircraft in the area and to assist the air tankers fighting the Goodwin Fire. When a drone intruded into the Goodwin fire on that date, there were 14 aircraft in the area including 5 helicopters, 3 very large air tankers (DC-10), and 5 heavy air tankers flying. The supervisor told detectives he spotted the drone at his altitude and when he tried to see where it was coming from, the drone started to circle the plane. Because of this intrusion, the airspace had to be immediately cleared due to the danger the drone posed to aircraft. As a result of aircraft leaving the area during a fire fighting mission, ground crews were left unprotected which required them to disengage from the fire. Aircraft were grounded for nearly an hour.

Based on the witness information, drone descriptions, and photos obtained from Carpenter’s website showing drone views of the Goodwin Fire, deputies began searching for him. Yesterday afternoon, an off-duty YCSO deputy spotted Carpenter’s van on Willow Creek Road in Prescott. He coordinated the response of patrol deputies and Carpenter was stopped. The drone was found in his van and seized. He was arrested and booked at the Camp Verde Detention Center and remains in-custody. Bond has not been set.

Detectives are meeting with Federal Officials on Monday to discuss additional charges based on federal statues regarding TFRs – Temporary Flight Restrictions.