Bromberg to make special appearance along with director of the film at Mary D. Fisher Theatre

Sedona AZ (March 6, 2014) – The Sedona International Film Festival is proud to welcome renowned musician David Bromberg to Sedona for a special premiere of “David Bromberg: Unsung Treasure” one night only on Wednesday, March 12 at the Mary D. Fisher Theatre. There will be two screenings at 4 and 7 p.m. The director/producer of the film, Beth Toni Kruvant, will host the screenings and Q&A discussions with Bromberg.

“David Bromberg: Unsung Treasure” is a feature documentary that reveals this rich and largely untold history of David Bromberg through intimate interviews with Bromberg, archival photographs and footage, music recordings (including never-before released cuts of Bromberg’s music), and interviews with his contemporaries and family.

An equal passion for blues, folk, country, bluegrass and rock and roll, Bromberg’s diverse range resurfaced in 2007 when he began a musical comeback, recording an album that was recently nominated for a Grammy award. The film shows Bromberg recording his latest album “Use Me” with a number of musical luminaries including Keb’ Mo’, Dr. John and Vince Gill. 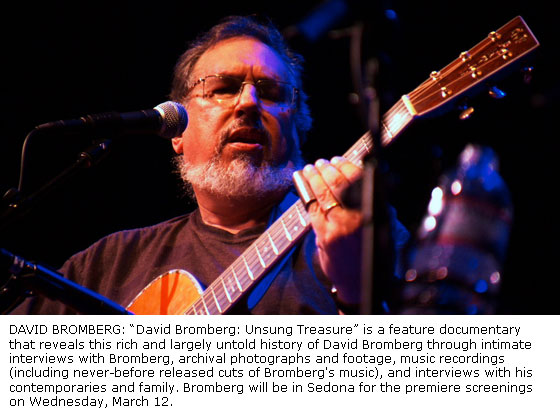 These stories unfold over the vibrant and soulful music of David Bromberg and his collaborators offering a rich companion soundtrack that tells its own narrative: a life worth living and a body of work worth pursuing.

Bromberg is a musician’s musician who collaborated with Bob Dylan, George Harrison, Jerry Garcia and other greats. Bromberg stopped performing publicly in the 1980’s to become a full-time violin maker and collector. He opened a violin shop in Wilmington, DE where he actively helps bring music to its poor, once culturally-rich downtown.

“David Bromberg: Unsung Treasure” will be shown at the Mary D. Fisher Theatre on Wednesday, March 12 at 4 and 7 p.m. Bromberg will participate in a Q&A discussion after the 4 p.m. show and will introduce the 7 p.m. screening. Kruvant will be hosting the Q&A after both screenings.