Festival presents ‘One Track Heart:
The Story of Krishna Das’ May 9

Sedona AZ (April 27, 2018) – The Sedona International Film Festival is proud present a one-night only special encore return of the award-winning documentary “One Track Heart: The Story of Krishna Das” on Wednesday, May 9 at 4 and 7 p.m. at the Mary D. Fisher Theatre.

The filmmaker — director Jeremy Frindel — will be in Sedona to host the premiere and conduct a Q&A discussion after both screenings. He will also be here for the premiere of his new film, “The Doctor from India” which will take place the next day at the Mary D. Fisher Theatre. 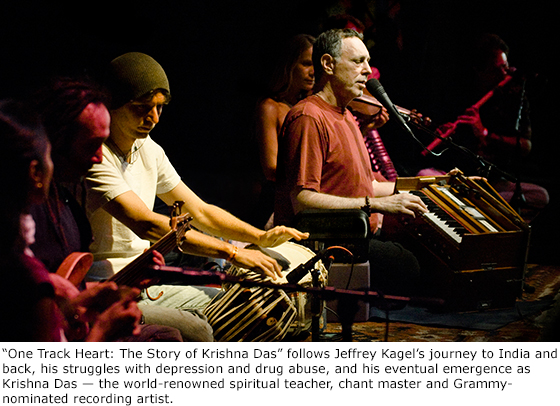 In 1970, a young musician named Jeffrey Kagel walked away from the American dream of rock ’n’ roll stardom — turning down the lead singer slot in the band that would become Blue Oyster Cult. He sold all his possessions and moved from the suburbs of New York to the foothills of the Himalayas in search of happiness and a little-known saint named Neem Karoli Baba (or Maharaji).

“One Track Heart: The Story of Krishna Das” follows Kagel’s journey to India and back, his struggles with depression and drug abuse, and his eventual emergence as Krishna Das — the world-renowned spiritual teacher, chant master and Grammy-nominated recording artist.

“I first met Krishna Das at a time when I was rather burnt out with the entertainment industry and looking for more meaning and direction in the things I was doing with my life,” said director Jeremy Frindel. “Chanting with him and hearing the stories of his time in India with his guru had a powerful effect on me and what I thought it was possible to do with my life. It has been a dream project to be able to dive deep into his world, and the world of Maharaji and his devotees, and to have the opportunity to tell his story and share it with people who might not be familiar with him.”

“I wanted to look at Krishna Das as a human being, as a character, and not as a spiritual teacher. And his life has been so dynamic, with rather extreme highs and lows, that an almost mythic arc presented itself as I was finding a shape and form during the edit. And through his life, his music and the incredible people who were interviewed for the movie, I hope this devotion and deep love comes through in the viewing experience,” added Frindel.

Meet Jeremy Frindel at this special encore of “One Track Heart” and enjoy a behind-the-scenes look at the documentary and the making of the film in the Q&A sessions following both screenings.

“One Track Heart: The Story of Krishna Das” will show at the Mary D. Fisher Theatre on Wednesday, May 9 at 4 and 7 p.m. Tickets are $12, or $9 for Film Festival members. For tickets and more information, please call 928-282-1177. Both the theatre and film festival office are located at 2030 W. Hwy. 89A, in West Sedona. For more information, visit: www.SedonaFilmFestival.org.