A New Play about Books, Race, Censorship and the American Character

In 1959 Alabama, segregationist Senator E.W. Higgins wants a controversial children’s picture book — about a white rabbit who marries a black rabbit — purged from the state library. But librarian Emily Wheelock Reed refuses, putting both of their worlds at risk in a time of extraordinary social change. Inspired by real events, Alabama Story brings forward issues of racism and censorship during the Jim Crow era of the Deep South. 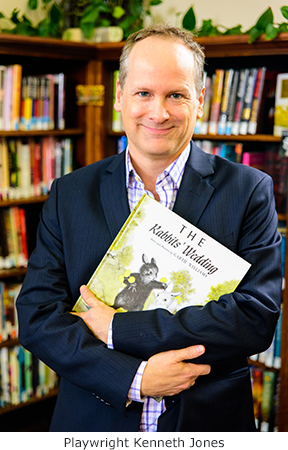 Alabama Story is produced by Camilla Ross and directed by Breinne Reeder. The cast features Sedona residents, Joan Westmoreland andRafe Rendell. Audrey Young joins us from Flagstaff for her third performance with Emerson Theater Collaborative and for the first time, Hawaiian resident Paul Drake and Phoenix resident James Yaw join the casting for this performance. We are also excited to have Ricky Davis Jr. returning from Los Angeles. Audiences may remember him from his amazing performance as Dr. Martin Luther King Jr. in The Mountaintop by Katori Hall last year. Alabama Story will also feature a special guest appearance by Blues Hall of Fame Inductee, Leon Jay Morton, who now resides in Cornville AZ.

All shows will be at the Fellowship Hall at Sedona United Methodist Church, 110 Indian Cliff Road, Sedona, AZ 86351. Tickets are available at the door or online at bit.ly/AlabamaStory. Show times are February 22 & 23 at 7 p.m. and February 24 at 2 p.m. Tickets are $25 each. Seniors and students are $20.