Prescott AZ (April 13, 2016) – On April 12, 2016, just after 9AM, a YCSO deputy saw a man, later identified as 28-year-old Theodore Acosta Jr. from Prescott Valley, standing near a blue passenger sedan on Marina Street at the west side of YCSO headquarters, 255 E. Gurley Street, Prescott. Acosta seemed unusually nervous as the marked Sheriff’s patrol car drove by. The deputy circled around and as he came by again, Acosta was now in the driver’s seat leaning over the steering wheel. The deputy circled one more time and pulled in behind the car to check on the driver. At that time, the vehicle was running and it appeared Acosta was trying to shift the car into reverse. 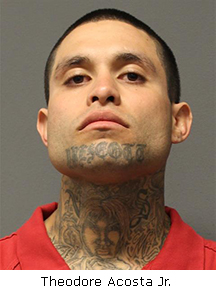 When the deputy contacted him, Acosta confirmed the car would not go into reverse. He told the deputy the car belonged to a friend named “Thomas,” who told him to pick it up. When Acosta was asked if he could contact “Thomas,” he said no and was unable to tell the deputy where “Thomas” lived. The deputy had already run the license plate and it was not registered to anyone with the name “Thomas.”

An assisting deputy arrived to aid in locating the vehicle owner, a Prescott Valley resident, which was unsuccessful. The deputy noticed there were tools on the backseat of the vehicle and recalled seeing construction workers at the nearby Elks Theatre. The assisting deputy went to the Elks and eventually located the owner of the involved vehicle and brought him to the parking area. The owner had never met Acosta and confirmed no one had permission to take his vehicle. The owner indicated that his ignition key had been stuck in the ignition switch and could not be removed.

Acosta was arrested and booked at Prescott’s temporary detention center on charges of Theft of Means of Transportation and Possession of Paraphernalia regarding a syringe found in his waistband. He remains in-custody on a $7500 bond.