Debt And Water Rates, Part 2:
Water Under the Bridge

Cottonwood AZ (July 29, 2014) – It was a watershed moment when Suzanne, an elderly widow surviving on social security income in the Verde Village — a rural suburb of Cottonwood, AZ — opened her water bill in November, 2013 and was shocked to see her water rates had jumped 67%. She thought the pipes had broken or ‘there must be a big billing mistake’ that could be corrected… All she had to do is call the billing office at Cottonwood Municipal Water & Wastewater Utility (CMWWU) and they would fix it. In the meantime only a block away, another water utility customer inside city limits received his water bill with only a 30% water rate increase. What Suzanne didn’t realize at the time was, she and 9,000 other city utility customers were stuck with footing a bill for the city’s staggering $38 million in municipal bond debt the city issued to buy five private water companies between 2004 to 2010. The main reason rates jumped up so high had little to do with the cost of maintenance, operations and electrical costs of the water utility; it was to pay debt service for CMWWU’s municipal revenue bond debts secured by water revenues (water bills). The debt burden added more than $23.00 a month to customers’ water bills. 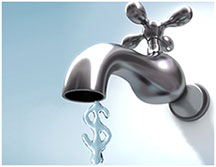 The city’s purchases for water companies in 2004 and 2006 came from borrowed money in the total amount of $37,545,000 ($13,580,000 for Cordes Lakes, Verde Santa Fe, and Clemenceau Water Systems; $16,580,000 for the Cottonwood portion of the Cottonwood Water Works System, and $7,385,000 was loaned to the city of Clarkdale to purchase their portion of the Cottonwood Water Works System). The city also borrowed a significant sum of money to repair, maintain and upgrade the purchased water companies’ infrastructure, fueling the city’s debt. In 2010, the city racked up $20 million more in municipal revenue bonds to build a recreation center, and the debt is being paid by a city utility 1% tax until the year 2027.

The first three municipal private water company takeovers were done by condemnation (eminent domain). Because these water systems were acquired “as is”, city officials have reported finding significant piping and problems with the private water companies’ wells and infrastructure since their acquisition, which could continue to significantly impact the water utility’s maintenance and operations costs in the future.

In a news article published July 2014, Rudy Rodriguez, the city’s finance director, told the news reporter that the city is considering raising rates approximately 8% in October, 2014 and that future rate increases will be about 42.2% over the next six years.

The City plans to increase its Enterprise Fund borrowing by $15,697,100 in Fiscal Year 2015 beginning in 2014 and ending June 30, 2015 to build a Water Reclamation Wastewater Plant and a regional communications center.*

Excerpts from the city of Cottonwood’s FY 2015 budget: “The largest planned single increase is in the Enterprise Fund, which includes the refinancing of the 2004 Bank of New York Water Bond. A general discussion about the funds follows; however, in-depth information is in the Key Issues section of this document. The FY 2015 Enterprise Fund budget, which consists of water and wastewater, has increased from last fiscal year’s revised amount of $16,956,265 to $32,653,365 for FY 2015. The $15,697,100 increase can, in part, be attributed to the Riverfront Wastewater Reclamation Plant, which is expected to begin construction in FY 2015, and the refunding of the 2004 Water Bonds. WATER ISSUES: One recent issue is the downgrading, by Standard and Poors, of the Water Utility Bonds due to inadequate debt service coverage. This was addressed during the budget process in FY 14 with a rate increase and will be looked at again in FY 2015. A rate increase is not calculated into the budget due to its uncertainty of coming to fruition. Any rate increase should guarantee the 1.35X coverage required by the bond covenants.

In July 2014, the U. S. Census’ estimated MHI for Cottonwood was $36,870 pre-tax income. A family of four who consumes 10,000 gallons of water per month outside Cottonwood city limits will pay an est. $990.00 a year for water, including taxes and fees, which is 2.69 percent of the family’s annual gross income. Added together, estimated annual 3% sales taxes and water added together will consume about 3.8% of the Median Household Income.**

There are huge risks to public water utilities who are highly leveraged and under-capitalized with enormous implications (financed big projects with too little equity and too much debt).  It is counter to public interest to under-capitalize utility operations.  Under-capitalization creates potential for debt default and disruption of sale of water and efficient water utility service, and raises the cost of acquiring debt capital besides violating fiscal discipline.  The original bondholders could raise interest rates and demand the utility increase its customers’ water rates, to lower the probability of default.  Raising rates on loans conflicts with providing utility service at the lowest reasonable cost to the customers.  The debt must be refinanced at the end of the loans and if the economic environment changes to one of tight money, refinancing rates could go much higher.