Lynch is recognized as one of the important creative force in acoustic music and at the forefront of women who have expanded the bluegrass genre. She has twice earned The International Bluegrass Music Association’s “Female Vocalist of the Year” title, as well as two GRAMMY nominations. Most recently, Lynch was awarded one of the 50 USA Fellowships from United States Artists (USA). With only seven awards going to musicians this year, the 2012 USA Fellows represent the most innovative and influential artists in their fields – including cutting-edge thinkers and traditional practitioners from the fields of architecture and design, crafts and traditional arts, dance, literature, media, music, theater arts, and visual arts.

For over two decades, Lynch has delighted audiences and enjoyed reverent standing ovations for her shows at prestigious music festivals and theaters around the world. She has crafted one of the most instantly identifiable sounds in acoustic music, encompassing classic bluegrass and thoughtful infusions of contemporary folk, country, rock, and swing. As a songwriter of inventive and evocative Music Row hits, her songs have been recorded by Kathy Mattea, Patty Loveless, and others, and she has perfo 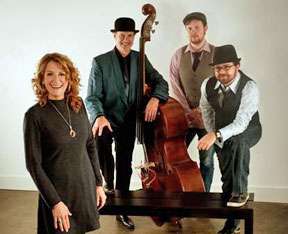 rmed as a backing/harmony vocalist with Dolly Parton, Linda Ronstadt, Emmylou Harris, and Pam Tillis — just to name a few.

By any measure, the Claire Lynch Band is high on the bluegrass world’s A-List, with musicians whose accolades include “The MerleFest Doc Watson Guitar Champion” (Matt Wingate); two IBMA Bass Player of the Year awards (Mark Schatz) and an unprecedented triple first-place win at the Winfield Kansas National Flatpicking Championship on guitar, fiddle and mandolin (Bryan McDowell).

Lynch will be previewing new songs from a forthcoming album in 2013 on esteemed roots label Compass Records, called by Billboard Magazine, “one of the greatest independent labels of the last decade.” Founded by Garry West and GRAMMY-winning musician Alison Brown, the company provides a thriving haven of creativity for artists and a reliable beacon of quality for roots music fans.

The evening will begin at 7pm with a performance by the Young Jammers, now affiliated with the Flagstaff School of Music and adjacent to the White Dove Room, performing as the warm up band. “I’m pleased to return to Flagstaff, and really delighted to have these budding musicians join our show,” said Lynch. “The Young Jammers are an important part of our program,” said Bonnie Dumei, co-director of the FSM, “Flagstaff School of Music builds relationships with our music students by providing an environment in which they feel valued. We are empowered to see our students through to success and presenting the Jammers is a thrill.”

The performance will be “concert style” said Michael Satterwhite, FFOTM President. “The intimacy of the White Dove Room is not condusive to dancing, and this will offer a real chance to hear bluegrass in a chamber music setting. We’re delighted to work with Chamber Music Sedona, the Flagstaff Music School and White Dove,” said Satterwhite.

Tickets are $25, and patron tickets $40 for the first row with a signed CD from Ms. Lynch. Tickets are available at the Flagstaff School of Music and Arizona Music Pro. For information visit www.flagstaffmusicschool.com or www.ffotm.net or call 928.268.1108