All poets are welcome to compete for the $75 grand prize and $25 second-place prize. The prize is funded in part by a donation from Verde Valley poetry supporter Jeanne Freeland. The slam is the fifth of the 2012-13 season, which will culminate in selection of Sedona’s second National Poetry Slam Team, the foursome and alternate who will represent the city at the National Poetry Slam in Boston and Cambridge, Mass., in August. 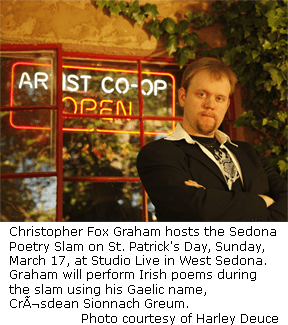 Slammers will need three original poems, each lasting no longer than three minutes. No props, costumes nor musical accompaniment are permitted. The poets will be judged Olympics-style by five members of the audience selected at random at the beginning of the slam. Poets who want to compete should purchase a ticket in case the roster is filled before they arrive.

The March Sedona Poetry Slam falls on St. Patrick’s Day, and will give the poets the added opportunity to celebrate two of Ireland’s greatest contributions to the artistic world, poetry and whiskey.

In celebration of his Irish heritage, Graham will host the slam and perform some Irish poems under his Gaelic name, CrÃ¬sdean Sionnach Greum.

For poetry slam standings, videos from past slams, and updates, visit foxthepoet.org. For poetry events in Northern Arizona, visit NecessaryPoetry.Com.