Weslowski was the 2012 Canadian Individual Poetry Slam Champion and has represented English Canada twice at the World Cup of Poetry in Paris, France, finishing second and fifth overall. 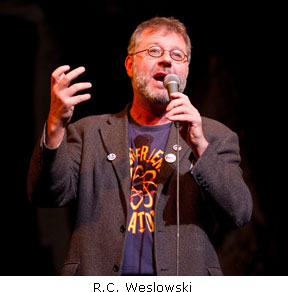 Weslowski has recently being performing his own one person shows â€œThe Wet Dream Catcherâ€ and â€œThe Cruelest Phone Book in the Worldâ€ at various Canadian Fringe Theatre Festivals. Weslowski has also been published in Quills, One Cool Word and most recently CV2. Weslowski also organizes youth poetry events inn Vancouver, British Columbia, Canada and has co-hosted the poetry radio show Wax Poetic for the past 13 years.

As an event organizer R.C. Weslowski was the artistic director for the 2005 Canadian Festival of Spoken Word and the publicity coordinator for the 2007 Individual World Poetry Slam.

Weslowski has also performed his poetry on the Eiffel Tower while snorting the remains of Orson Welles and along the Rhine River in Germany while debating Schopenhauer with a schnauser. But aside from all that he will literally blow your brain apart and put it back together again using nothing but his voice. Seriously

All Canadian nationals and expatriates living in and visiting Sedona and the Verde Valley are specially encouraged to attend.

All poets are welcome to compete for the $75 grand prize and $25 second-place prize. The prize is funded in part by a donation from Verde Valley poetry supporter Jeanne and Jim Freeland.

The slam is the fourth the 2014 season, which will culminate in selection of Sedona’s third National Poetry Slam Team, the foursome and alternate who will represent the city at the National Poetry Slam in Oakland, Calif., in August. Poets in the slam come from as far away as Phoenix, Tucson and Flagstaff, competing against adult poets from Sedona and Cottonwood and youth poets from Sedona Red Rock High School’s Young Voices Be Heard slam group.

Founded in Chicago in 1984 by construction worker Marc Smith, poetry slam is a competitive artistic sport. Poetry slams are judged by five randomly chosen members of the audience who assign numerical value to individual poets’ contents and performances. Poetry slam has become an international artistic sport, with more than 100 major poetry slams in the United States, Canada, Australia and Western Europe.