Broadway on Screen: ‘She Loves Me’
premieres in Sedona Nov. 12

Sedona AZ (November 3, 2017) – Sedona International Film Festival presents the BroadwayHD series — featuring Broadway plays and musicals in high definition on the big screen — with “She Loves Me”. The event will show in Sedona on Sunday, Nov. 12 at 4 and 7 p.m. at the festival’s Mary D. Fisher Theatre.

“She Loves Me” was nominated for eight Tony Awards, including nominations for the performances of all three stars: Jane Krakowski, Zachary Levi and Laura Benanti. 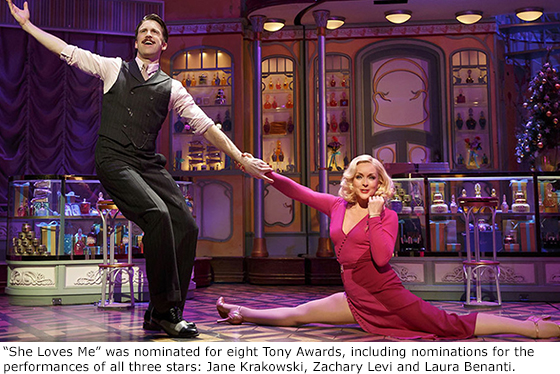 “She Loves Me” follows Amalia and Georg, two parfumerie clerks who aren’t quite the best of friends. Constantly bumping heads while on the job, the sparring coworkers can’t seem to find common ground. But little do they know the anonymous pen pals they have both been falling for happen to be each other! Will love continue to blossom once their identities are finally revealed?

“All of the performers are skilled singers and actors, filling in the generic contours of their characters with proficient professionalism.” — Charles Isherwood, New York Times

“And let’s hear it for the chorus — an adorable, charmingly diverse bunch.” — David Cote, Time Out New York

“Engaging performances, dynamic dancing and a lively orchestra make it the feel-good show of the fall …The lead performers are smashing, especially Pinkham … Bleu is a spark plug of energy, and his hoofing in ‘You’re Easy to Dance With’ and ‘Let’s Say It With Firecrackers’ are two of the musical’s dance delights.” — Frank Rizzo, Variety

“She Loves Me” will be shown at the Mary D. Fisher Theatre on Sunday, Nov. 12 at 4 and 7 p.m. Tickets are $15, or $12.50 for Film Festival members. Tickets are available in advance at the Sedona International Film Festival office or by calling 928-282-1177 or online atwww.SedonaFilmFestival.org. Both the theatre and film festival office are located at 2030 W. Hwy. 89A, in West Sedona.