Dodge (Ed Harris) and Halie (Amy Madigan) are barely hanging on to their farmland and their sanity while looking after their two wayward grown sons (Sommer and Sparks). When their grandson Vince arrives with his girlfriend, no one seems to recognize him, and confusion abounds. As Vince tries to make sense of the chaos, the rest of the family dances around a deep, dark secret. 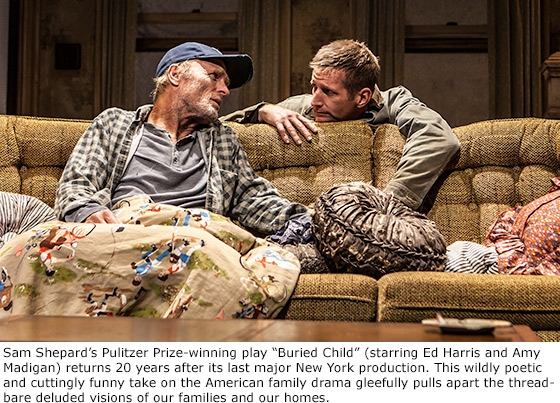 This wildly poetic and cuttingly funny take on the American family drama gleefully pulls apart the threadbare deluded visions of our families and our homes.

“Thoughtful and absorbing. Ed Harris is splendid. Mr. Elliott’s production wants us to listen to Mr. Shepard’s characters as if they truly were members of our own family, so that (just like our own family) they can suckerpunch us when we feel most unguarded.” —  Ben Brantley, The New York Times

“A wild ride of a harrowing revival. Ed Harris is engrossing to watch and Amy Madigan is perfection.” — Jennifer Farrar, Associated Press

“A riveting revival that captures the symbolism and rich poetic imagery that makes Shepard so unique. This is vintage Shepard in the hands of masters.” — Wilborn Hampton, The Huffington Post

“Vivid and visceral. A gritty, mysterious, and engrossing portrait of domestic life gone to hell.” — Matt Windman, AM New York

“Buried Child” will be shown at the Mary D. Fisher Theatre on Sunday, April 15 at 4 p.m. Tickets are $15, or $12.50 for Film Festival members. Tickets are available in advance at the Sedona International Film Festival office or by calling 928-282-1177 or online atwww.SedonaFilmFestival.org. Both the theatre and film festival office are located at 2030 W. Hwy. 89A, in West Sedona.