Sedona AZ (March 3, 2016) – The Banff Mountain Film Festival World Tour is returning to Sedona. For the second year, the Sedona International Film Festival is bringing the spirit of outdoor adventure and mountain culture to red rock country. This year’s World Tour features the best mountain films this year, showcasing amazing filmmaking talent from the world over to an audience that spans the globe.

The tour will make a stop in Sedona on one night only: Monday, March 14 at 7 p.m. at the Sedona Performing Arts Center. 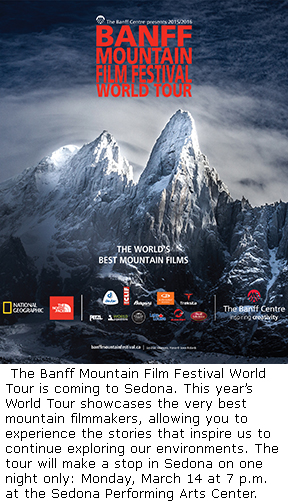 “Like every year, the Banff Mountain Film Festival brings exciting program to the screen, allowing everyone to experience these inspiring stories that drive us to keep exploring our world outside,” said Patrick Schweiss, director of the tour host Sedona Film Festival.

The 2016 World Tour features a collection of exhilarating and provocative films that explore life in the mountains. They highlight remote cultures, intense expeditions into exotic landscapes and bring adrenaline-packed action sports into sharp focus. You will experience an evening of the most inspiring action, environmental, and adventure films from the festival, and audiences across Canada, the United States, and internationally from Scotland to South Africa to China, Lebanon, Chile, New Zealand and Antarctica get to enjoy it all, too.

Award-winning films and audience favorites from the annual Banff Mountain Film Festival are among the films chosen to travel the globe.

Sedona’s tour stop will feature films such as:

The Banff Mountain Film Festival World Tour stop in Sedona is made possible by a generous grant from the Leo & Rhea Fay Fruhman Foundation.

Tickets are $20 general admission; $17 for film festival members and students. For tickets and information visit www.SedonaFilmFestival.org or call 928-282-1177.

Screenings of The Banff Mountain Film Festival World Tour in Canada and the USA are presented by National Geographic and The North Face; sponsored by Deuter, Bergans of Norway, Icebreaker, Treksta, and Clif Bar & Company; with support from Petzl, Kicking Horse Coffee, World Expeditions, and The Lake Louise Ski Area, Mammut, and Banff Lake Louise Tourism.