“In a 2001 Gallup poll, 51 percent of adults cited snakes as their biggest fear and spiders were fifth,” said Zen Mocarski, public information officer for the Game and Fish Region 3 office in Kingman. “But, spiders, scorpions, rattlesnakes, the Gila monster, and a variety of other critters are part of life in Arizona. As it warms up, they’ll become increasingly more visible.”

The Arizona Game and Fish Department reminds the public that people who take the time to learn and educate themselves and their children can minimize the likelihood of a dangerous encounter.

Arizona serves as home to the most dangerous rattlesnake, spider, lizard, and scorpion in the nation. However, bites and stings aren’t as common as most might believe.

Mocarski worries most about young children who have a natural curiosity of their surroundings.

“Parents need to teach children not to pick up any type of wildlife,” he said. “Teach your kids to come and get you when they see something.” 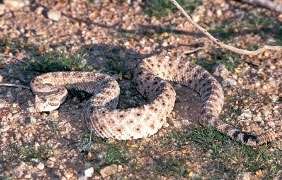 The most commonly encountered rattlesnake in Arizona is the western diamondback, which also accounts for the most bites. And, while there is no such thing as a typical rattlesnake bite, the Mohave is accepted as the most dangerous, although the potency of its venom can vary from region-to-region.

“What’s the most dangerous rattlesnake?” Mocarski asked. “The one that bit you.”

Mocarski said accidental bites are rare and many incidents involve alcohol. However, if bitten, the rules to follow are simple.

“Remove any restrictive clothing and jewelry and get to a medical facility as quickly as possible,” he explained. “Forget what you’ve seen in movies and get treatment with anti-venom.

“Do not cut open the bite area and try to suck out the venom, don’t submerge the bite area in ice, and do not tie off the area with a tourniquet.”

While approximately 30 percent of rattlesnake bites are considered dry bites – those that do not require anti-venom treatment – a medical professional should make that determination.

In addition, do not spend time trying to capture or collect the rattlesnake. Identification is not necessary for treatment.

Understanding wildlife behavior can go a long way in avoiding bites and stings.

Rattlesnakes are cold blooded and have to work to try and maintain an ideal body temperature. During cooler times, such as evening hours, rattlesnakes will seek out a heat source such as pavement. During the heat of the day, they will seek shade.

Mocarski added that it is a myth that rattlers will always rattle before a strike.

“It’s our jobs to take certain precautions,” Mocarski said. “Keep a close eye on the sides of trails and never place your hands and feet in an area you can’t see.”

As for dogs, Mocarski said encounters with rattlesnakes can be dangerous.

“Dogs tend to be bitten around the face and neck,” he explained. “Training can help, but keeping your pet on a leash and close to your side will help avoid bites that occur as a result of a dog’s natural curiosity.”

For scorpions and spiders, Mocarski said to wear gloves when working around wood or rock piles and to shake out shoes that have been left outside. He added that open-toed shoes provide little protection.

Most scorpion stings are comparable to that of a bee. However, the sting of the bark scorpion can be more severe. Its sting can be harmful to young children, the elderly, and individuals in poor health.

“People need to remember that everyone reacts differently to venom,” Mocarski explained. “Pay attention to how your body is reacting. If someone is having trouble breathing, slurred speech, or nausea, following a bite or sting, they should probably seek medical attention.”

While all spiders are venomous, two factors must exist to be considered a threat to humans: the venom must be strong enough to do damage and their jaws must be able to break human skin. With these factors in mind, two spiders in the area are considered dangerous to humans: the brown (a relative of the brown recluse), and the black widow.

The Gila monster is the only dangerous lizard in North America. Its bite is extremely painful and can result in vomiting and convulsions. The Gila monster is also notorious for not letting go and victims have been known to show up at an emergency room with the lizard still attached.

“A Gila monster bite is not something an individual wants to experience,” Mocarski said. “The good news is that if people leave them alone, they’ll leave the people alone. I’ve never heard of an accidental Gila monster bite.”

Mocarski added that the Gila monster is protected and it is illegal to disturb, capture, or kill one. It is rarely seen, spending much of its life underground.

“All these animals are important parts of the ecosystem,” Mocarski explained. “Rattlesnakes help keep rodent populations under control while scorpions and spiders feast on a number of different types of insects.