Cottonwood AZ (May 23, 2016) – On May 21, 2016, at around 12:45 AM, a YCSO deputy attempted a traffic stop on a motorcyclist riding on the sidewalk adjacent to Highway 260 near Del Rio Drive, Cottonwood. The rider fled and following a brief pursuit, was arrested after crashing the motorcycle in the 2300 block of Cedar Trail, Cottonwood. He was identified at 43-year-old Vince Saverino from Cottonwood. Saverino was booked at the Camp Verde Detention Center on charges including Unlawful Flight from pursing Law Enforcement Officer, Weapons Misconduct, and Vehicle Theft. He remains in-custody on a $10,000 bond. 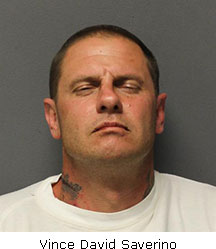 Following the crash of the 2005 80cc Yamaha Dirt bike, the deputy detained Saverino who was complaining of neck and shoulder pain. EMS personnel arrived, treated Saverino on scene, and then transported him to Verde Valley Medical Center under deputy escort where he was cleared for booking. Inside a black pouch on the motorcycle, deputies recovered a loaded .45 caliber handgun. A record check of the license plate indicated the motorcycle had been reported stolen out of Phoenix. Saverino’s record showed prior felony convictions which prohibit him from possessing firearms. As a result, he was charged with Weapons Misconduct. Saverino denied any knowledge that the motorcycle was stolen and claimed the handgun was not his.