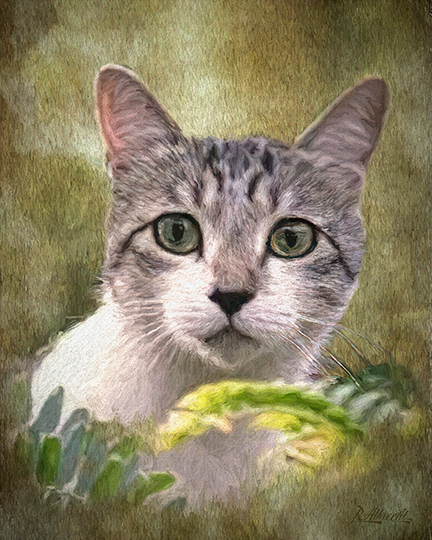 No, not by death, but by disappearance.

For the last six months, age has hit her hard. Her hips began to fail her. She developed dementia and would often find herself crying and lost while going from one room to another.

She would lie down in her kitty litter. Hide. Cry out for no apparent reason. We were counting the days before we would be forced to take her to the dreaded vet visit.

Mercifully, she spared us the indignity, and resolved the issue herself, or so it seems.

Five nights ago, when my wife and I returned home, our kitty was in terrible distress. Her meows were pitiful, and she seemed to be seeing invisible enemies in the house, running, despite her hips, in panic from one end  to the other.

Whoever or whatever this invisible attacker was,  it totally spooked her. She would take a few steps then jump straight up into the air as if she was walking on an electrified plate.

She also let out growls like we have never heard before. Low. Guttural. Shrieks.

We put her on our favorite couch between us and tried to comfort her, but she was in too much distress to allow us to cuddle and she jumped away to hide somewhere in the house.

We decided to leave her be and we hardened ourselves to the actuality that she had little time left and that the most humane thing to do would be to take her to the vet to spare her the agony.

We could not locate her, so we went to bed just to be awakened at around 3 a.m. by her howls. As we came out from our sleep, she abruptly stopped howling. There was complete silence.

We listened for her but there was not a peep. We fell back into a restless sleep as the weight of what we might have to do in the morning fell upon us.

When we woke, we looked for her, but we could find no sign of her whereabouts. We looked in all her hiding places, went through the backyard with a toothcomb, called her name, went through our closets, looked under couches and beds, spent an entire day searching for her. Still, no luck.

Two days later still no Teela. By then, if she had died in the house, there would have been signs and odors. By the fifth day, which is today, no sign of her. Her litter box had not been used since the first night.

We do have a doggy door in the kitchen that for years she had used to come and go as she pleased. Over the last few months she could no longer go in and out on her own because she simply was too weak to get through the door.

Somehow, she must have gone through. Still, she would not have been able to jump the seven-foot fencing around the yard and would have had to been hiding in the yard somewhere. Our search turned up nothing.

Was she taken by an owl? Did an athletic coyote get her? Or did she simply vanish into another dimension?

They say when cats know they are going to die they go and hide to do so in private and spare their loved ones the pain of watching them go.

I guess this is a double-edged sword. We did not have to put her to sleep but we have no closure. It’s like she is hanging in the same place as Schrödinger’s cat. Is she dead? Is she alive? We might never know.

We loved our little kitty. She was fearless, cuddly, friendly yet a deadly hunter.

She lived an incredible cat life. She had love and food indoors. Adventure and snacks outdoors. She went out when she wished. She was free.

We put out flyers in the neighborhood but no response yet.  Honestly, we feel like she just passed directly into cat heaven, but we still cling to hope that perhaps she managed to escape the backyard and found herself out in the street confused and bewildered and was taken in by a passerby.

Hope is half of having. Who knows? Thank you Teela for the wonderful years of love you gave us. Whether you return or not, the blessing of you will never diminish.

THE MOMENT IS UPON US : Paid Political Announcement by Samaire For Mayor