Sedona AZ (May 1, 2013) – Want a double-dose of comedy for your funny bone? Join Zenprov Comedy for their one-night only completely improvised show “LAUGHTEROL®! Warning: May Contain Nuts” at 7:30 PM on Saturday, May 18 at the Mary D. Fisher Theater in Sedona.

“Zenprov Comedy is the best improv troupe in Arizona,” said Mr. Patrick Schweiss, Executive Director of the Sedona International Film Festival. “People were laughing so hard their cheeks were hurting.” 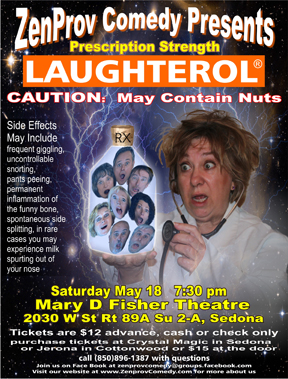 Similar to the improvised TV show “Whose Line Is It Anyway?”, Zenprov Comedy performs fast-paced, spontaneous comedic scenes created in the moment—always based on audience suggestions and hands-on participation with the actors. Unlike sketch or standup comedy, nothing is scripted or rehearsed ahead of time. It’s completely spontaneous and never the same show twice.

“Laughter is the best medicine,” said Derek Dujardin, director of Zenprov Comedy. “It’s been proven to boost the immune system and produce endorphins 100 times more powerful than painkillers. That’s why we’re calling this show “LAUGHTEROL®!” If we all could just laugh more, we’d hurt less.”

Plus, the troupe plans to lampoon TV commercials and big pharmaceutical companies who advertising the latest diseases along with the drugs invented to treat it—side effects included.

The troupe has also added a brand new feature called “Relationship Rewind” where a couple is interviewed on stage about their first date. Then two actors reenact the early courtship. Whenever one the actors get something wrong about the date, the real couple rings a bell and the actors must re-invent the date on the spot.

“Improv is a unique theatrical experience where audience and actors come together to create something magical and extremely alive right there in the moment,” said Shaeri Richards, Zenprov member. “And it’s funny too.”

Tickets are $12 advance or $15 the day of the show. Ticket can be purchased in person at Crystal Magic in Sedona or at Jerona Java Café in Cottonwood, or online at www.ZenprovComedy.com with a credit card or PayPal account.

Zenprov Comedy’s last show sold out early and more than 20 people were turned away, so the group recommends buying tickets in advance.