YSCO Rescue Volunteers continue to
Risk their lives to Save Others

Sedona AZ (September 15, 2015) – On September 9, around 11 AM, YCSO dispatchers received a call regarding a man stuck on the north face of Bell Rock in Sedona, Arizona. Apparently the man had called a family member and told them he could not find a safe way off a ledge. YCSO Forest Patrol deputies arrived to assess the situation and requested assistance from the Yavapai County Search and Rescue Team, Backcountry Unit, along with a DPS Ranger helicopter crew, intending to conduct a short haul, or rope rescue, operation. The man was later identified as 34-year-old Craig Slaunwhite from Canada.

Just after 1 PM, the DPS Ranger helicopter arrived and determined they would need to rappel 2 members of the Backcountry team onto a ledge above Craig and after finding an anchor point, one of the rescuers would rappel to down to him. At this point, the rescue team member would rig Craig’s harness for a short haul rescue by the helicopter off the ledge. By 3 PM, the DPS Ranger crew had successfully lifted Craig and the rescue team members off the rock. 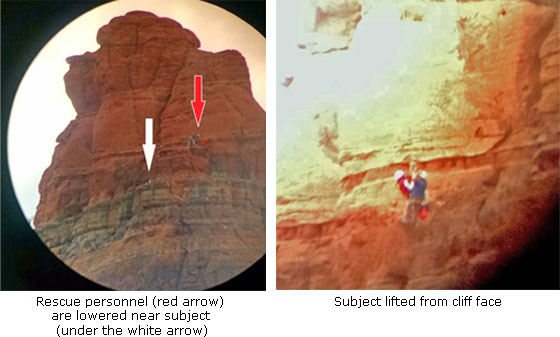 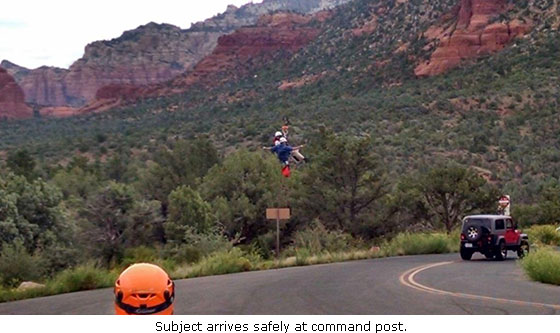 Craig told deputies he was attempting to make it to the top of the rock after finding a preexisting rope line. During the ascent, he got stuck on a ledge and called his friend who in turn called 911 for help.

YCSO cannot thank enough the search and rescue volunteers who continually provide live saving solutions to anyone who has needed help in the many wilderness rescues over the last few weeks. It is hoped the ongoing publicity regarding incidents like these will cause those intending on venturing into the wilderness to PLAN, PREPARE, and avoid exceeding your abilities/experience.