Sedona AZ (May 6, 2017) – UPDATE – A combination of media outreach, calls from the public and excellent detective work has resulted in the arrest of the Village of Oak Creek Circle K Robbery suspect. He is identified as 38-year-old Benjamin Baltz from the Village of Oak Creek. He was arrested yesterday and booked at the Camp Verde Detention on a charge of Robbery and Theft and remains in-custody. An unrelated court warrant with a $25,000 bond was also verified during the booking process. 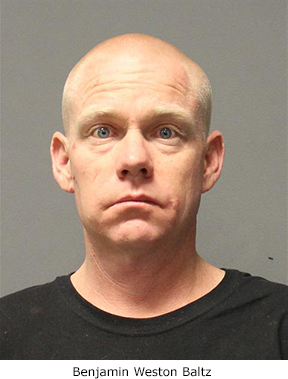 A YCSO detective assigned to the case recently provided photos of the suspect from surveillance video which were issued to the media on May 2, 2017. As a result, several persons contacted the Sheriff’s Office with information and some claimed they recognized the clothing and knew him by name. Detectives also learned that suspect Baltz might be staying in an apartment building with a roommate on Sugarloaf Street in the VOC. A records check of the roommate revealed an apartment number for 125 Sugarloaf Street located just a few hundred yards from the Circle K in the direction the suspect fled.

Yesterday while checking around the apartment building, the case detective spotted Baltz seated in a truck on Sugarloaf Street. Baltz crouched down to avoid being seen when the detective drove by. As the detective was turning around, Baltz left the truck and tried to hide behind a wall before entering a nearby apartment. At the apartment Baltz was seen entering, a man answered the door and claimed Baltz was not inside. He let the detective inside and Baltz was found hiding in a bathroom.

Baltz claimed no involvement in the Circle K robbery. Clothing matching the suspect’s clothing seen in the security video was found during the investigation.

The clerk told deputies a male came into the store and walked directly to the counter. He was described as a white male approximately 6’00 in height, weighing approximately 170 pounds and wearing a blue long sleeve hoodie, faded (stonewashed) blue jeans, sunglasses, and white tennis shoes that looked almost new. The suspect had the hood of his hoodie pulled up, so there was no hair color or facial description available. The clerk said the suspect appeared right handed. 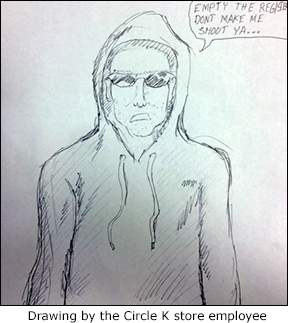 Deputies searched the area but were unable to locate the suspect. Businesses in the vicinity were also provided suspect description details.

A hand drawing by the store employee was submitted and is included. Security video may be available at a later time. Deputies are working leads but still seeking any information from the public.

If anyone has information regarding the suspect’s identity or whereabouts, call the Sheriff’s Office at 928-771-3260 or report the information anonymously to Yavapai Silent Witness at 1800-932-3232. If you see the suspect, call 911.