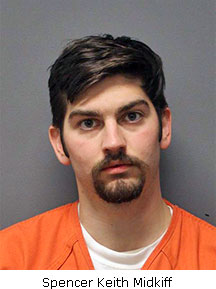 Background – After the deputy contacted Midkiff, the driver and only occupant, he saw a commonly used and labeled marijuana dispensary container inside the car. After examining a container, the deputy detected marijuana residue and noted Midkiff was not a medical marijuana card holder. Checking the vehicle interior further, the deputy found additional marijuana, paraphernalia, and a “lock box” on the back seat.

While examining the box, the deputy could detect a strong odor of marijuana. After gaining access to the box, the deputy located several packages of what later tested positive for cocaine. Nearly 100 grams of cocaine was recovered representing several thousand dollars in street value. Additional contraband inside the box included 14 grams of marijuana, a blotting sheet with 455 segmented pieces that tested positive for LSD, a bottle containing liquid LSD, and several syringes containing mushroom spores in a special solution used during cultivation.

During booking, Midkiff admitted he had hidden a gram of cocaine in his rectum area while the deputy was completing a records check after the initial traffic stop.