Prescott AZ (July 16, 2013) – YCSO deputies and detectives have continued their investigation regarding the burglary of a Yarnell home following evacuation due to the Yarnell Hill Fire. On July 12, 2013, detectives received an anonymous tip that 22-year-old Thomas Adams was in possession of stolen firearms taken from the victim’s residence. Adams was known to reside in Yarnell and associated with Slone and Frost, already in-custody for the burglary. 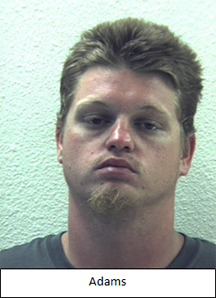 Late in the day on July 12, 2013, detectives contacted Adams during a traffic stop in Prescott and he readily admitted possessing a .22 caliber pistol stolen from the victim’s home. Adams indicated the handgun was still inside his Yarnell residence and Frost had given him the weapon. Detectives completed a search warrant for Adam’s residence and recovered the pistol along with additional stolen property. Detectives expect to locate more firearms as the investigation continues. Several search warrants have already been served.

Adams was booked at the Camp Verde Detention Center on charges including Theft and Control of Stolen Property, Prohibited Possessor in Possession of a Firearm, and Trafficking in Stolen Property.

Detectives continue looking for the remaining stolen property and the likelihood of additional suspects. If anyone has information related to this incident or other thefts in the Yarnell community, please contact Detective Keith Levin at 928-771-3278.

Original story is below —

On Monday, July 8, 2013, Yavapai County Sheriff’s Office deputies were dispatched to the 16000 block of West Way in Yarnell regarding a burglary report. The homeowner told deputies that sometime between June 30, and July 8, 2013, suspects forced entry into his residence via a bedroom window. Several items were stolen including firearms, numerous high quality knives, coins, and jewelry. 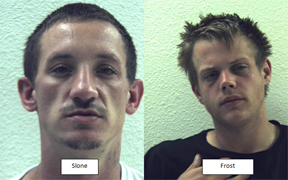 The victim indicated he had seen two suspicious males in their 20’s near his residence when the evacuation was just getting underway. He provided a detailed description of both men, noting that one was carrying a brownish colored backpack. During this conversation, the deputy recalled seeing the suspicious men while evacuating a neighborhood on Crest Way. The deputy spoke with them and both claimed they were assisting with the evacuation. One of the men indicated he was trying to borrow a vehicle so he and his friend could drive to Peeples Valley.

On July 9, 2013, deputies were contacted by the owner of a 1994 green Geo Metro who explained he was trying to find his car after loaning it to Slone and Frost. A short time later, the owner found his car parked at the Comfort Inn on White Spar Road in Prescott. The deputy also recalled seeing Frost drive this vehicle towards a checkpoint earlier in the week.

Deputies sent out a bulletin to area law enforcement agencies describing the stolen property. On July 10, 2013, a Prescott Police detective contacted the investigating deputy and advised a large Buck brand knife and hatchet, matching descriptions in the stolen property report, had been pawned. The pawn shop was located in Prescott and the customer pawning had been identified as Robert Frost who received a cash payout.

Deputies recovered the items and confirmed by surveillance video and documentation from the pawn store that both Frost and Slone were in possession of stolen property.

On July, 10, 2013, YCSO deputies found Slone at the Comfort Inn. A consent search of the rented room revealed a stolen telescope taken from the Yarnell home. Slone was arrested and interviewed by YCSO detectives. Slone initially denied involvement, but after learning of the evidence obtained so far, admitted his participation. He later told detectives some of the stolen coins were buried “in the woods” at a location in Prescott. Slone was taken to this area and several stolen items, including jewelry and coins, were recovered.

With the motel room secured pending a search warrant, Frost arrived unannounced and was arrested. The search resulted in additional stolen property found and recovered.

Frost also initially denied involvement until learning of the evidence collected. He also indicated some of the property had been sold to a “cash for gold” location in Prescott.

The investigation is ongoing as detectives are in the process of locating the stolen firearms along with additional property. Detectives are also determining if the suspects are involved in any other thefts.