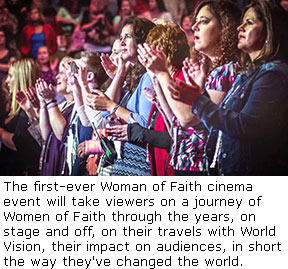 The first-ever Woman of Faith cinema event will take viewers on a journey of Women of Faith through the years, on stage and off, on their travels with World Vision, their impact on audiences, in short the way they’ve changed the world.

Partly historical, and frequently hysterical, this unique cinematic experience will be packed with some of the most popular pieces from the beloved speaking team to include Anna Trent, Thelma Wells, Mary Graham, Luci Swindoll, Sheila Walsh, Jen Hatmaker, Sandi Patty, Patsy Clairmont, Nicole Johnson and Marilyn Meberg as well as music and performances from Christian contemporary artists that appeared on the tour.

Featuring never-before-seen interviews, outtakes, and behind the scenes footage, this event presentation will bring back memories for all those who have attended a Women of Faith weekend as well as create new memories for those experiencing it for the first time.

“Women of Faith: An Amazing Joyful Journey” will be shown at the Mary D. Fisher Theatre on Monday, March 28 at 4:00 p.m. Tickets are $15, or $12.50 for Film Festival members. Tickets are available in advance at the Sedona International Film Festival office or by calling 928-282-1177 or online at www.SedonaFilmFestival.org. Both the theatre and film festival office are located at 2030 W. Hwy. 89A, in West Sedona.