The area is typically closed from December 1 through June 30 each year to reduce human disturbances to the eagles during their nesting season, which can cause eagles to abandon their eggs. 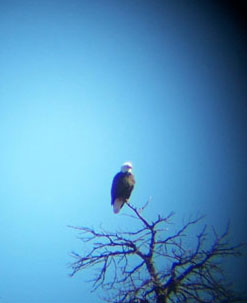 While historically there have been two closure areas in the Verde Valley, the Towers closure (along the Verde from Sycamore Canyon confluence downstream two miles) was not necessary the last few years due to lack of eagle occupancy. Although a pair of eagles are occupying the area once again this year, there is no sign of nesting and therefore no need for the Towers closure to be enacted.

The Ladders area is located along a two mile stretch of the Verde River and adjacent to national forest lands south of Camp Verde.

During the closure, eagle nest watchers from the Arizona Game and Fish Department observed a golden eagle attack a single nestling, causing it to fall from the nest and suffer a broken wing. The eaglet was rescued and taken into captivity for rehabilitation.

Eagle nest watchers closely monitor nesting bald eagles throughout the state, including several sites in the Verde Valley, and monitor these sites from the beginning of incubation in mid-February to the time the young eagles fledge their nests in late May.

Other Verde Valley bald eagle nesting attempts on the Verde River just above Clarkdale, on Oak Creek, Beaver Creek, and lower on the Verde River below the Ladders site have been successful thus far. These nesting areas are fairly protected by topography and/or limited access, so closure areas have not been necessary.

The Forest Service and the Arizona Game and Fish Department would like to thank the residents of the Verde Valley and Northern Arizona for their cooperation with closures for bald eagles.

For more information on these areas, contact the Red Rock Ranger District at 928-203-2900.