Sedona AZ (March 20, 2014) – At approximately 4:30 pm , Tuesday March 18, 2014, Sedona Fire District (SFD) emergency crews were called to Boynton Pass Road in West Sedona for a reported vehicle fire. Upon arrival, crews found a Jeep from Safari Jeep Tours parked on the roadway with fire and smoke coming from the vehicle’s engine compartment. The driver and his passengers had safely evacuated the vehicle. 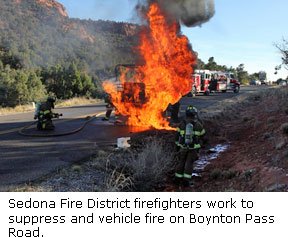 The driver reported seeing smoke coming from under the hood of the vehicle.  Once he stopped flame and heavy smoke was visible from the front of the vehicle.  “In this case the driver did the right thing stopping on the roadway. Typically when you have car trouble you pull off to the side of the road.” stated SFD Fire Marshal Gary J. Johnson. “Parking the vehicle on the road prevented the fire from spreading into the dry vegetation avoiding a wildfire.”

On Sunday evening, March 16, 2014, at approximately 6:50 am, Sedona Fire crews responded to a structure fire on Cascabel Court, in the Village of Oak Creek. Arriving on scene in less than six minutes, crews 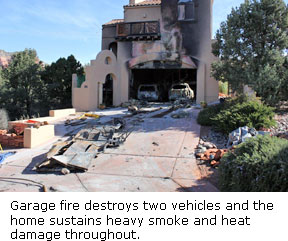