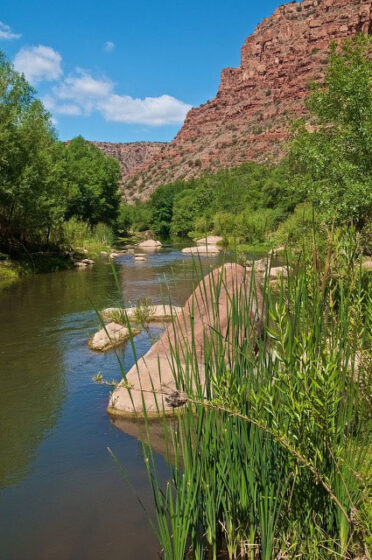 Verde Valley News – Groundwater pumping from the Big Chino aquifer is the single largest threat to the base flow of the upper Verde River, the headwaters of Arizona’s most extensive living river. The impact of that pumping, compounded by the effects of climate change, has resulted in an alarming decline of river flow. Gary Beverly and Ed Wolfe, both members of the executive committee of the Citizens Water Advocacy Group (CWAG), will explain the connection between groundwater use and river viability, the flaws in Arizona groundwater laws that allow for unsustainable pumping and the critical importance of the upper Verde to the region’s economy and ecosystems in a Zoom webinar on Saturday, Sept.10, from 10 a.m. to noon. A question and answer period will follow the presentation. The Zoom registration link is posted in the “Next Meeting” section at www.cwagaz.org .

Big Chino groundwater is the lifeline of the upper Verde, supplying over 80% of its base flow. Wolfe will explain how withdrawals from the Big Chino aquifer diminish the flow at Verde Springs. Removing 1,000 acre-feet per year (afy) of water from the aquifer, for example, eventually diminishes the flow from the Springs by that same amount. Using graphs based largely on U.S. Geological Survey (USGS) data, Wolfe will show how the combination of pumping demands from agriculture and unrelenting housing development, plus multi-decadal drought, have already led to a reduction of nearly 260 afy of lowest annual base flow. If the current trends continue, perennial flow will be temporarily lost annually before the end of this century.

Beverly will talk about the outdated, confusing Arizona groundwater management laws, many of which have lax regulations and loopholes that can grant many users unlimited pumping rights. He will also detail the significance of the upper Verde, the 25-mile stretch that feeds the remainder of the river, as well as the river as a whole, which is both an economic driver and habitat for a wide variety of plants and animals, including 78% of Arizona’s breeding bird species, 89% of bat and carnivore species, 83% of native ungulate species, and 76% of reptiles and amphibian genuses.

Edward W. Wolfe, Ph.D., an initial member of the CWAG board, is a retired geologist who spent his 40-year career with the USGS, which included geologic studies in central and northern Arizona.

Gary Beverly, past president of CWAG, joined the organization in 2010 and is currently Public Policy Committee Chair. He holds a Ph.D. in Physical Chemistry from the University of California, previously taught physical science and alternative energy at Yavapai College, and also worked as a farmer, contractor, and businessman. Since retiring, he is an environmental activist focused on protecting the Verde River.

CWAG is a local citizens group advocating for a secure water future for Prescott and central Yavapai County and for the protection of the upper Verde River. For more information, visit www.cwagaz.org or email info@cwagaz.org  .