Cottonwood AZ (August 31, 2017) – After the arson and burglary in May of 2013 at a home in the 1900 block of South Deserama Circle, Cottonwood, an investigation was initiated until leads were exhausted. In July of this year, a YCSO detective received tips regarding the involvement of certain suspects in this incident. These tips provided information which proved reliable as they contained details only known to detectives and not shared in the media. After weeks of follow-up by the detective, the suspects were identified as 26-year-old William Stockwell from Cornville, 25-year-old Joshua Dawson from Cottonwood, and 22-year-old Bradley Meyer from Cottonwood. Detectives confirmed the suspects knew that the residents at the Deserama Circle home were out of town at the time of the burglary/arson. It was learned Dawson apparently had an ongoing conflict with the Deserama Circle occupants related to drug sale favoritism so the 3 suspects decided to burglarize and burn down the home. The suspects did not realize that one of the occupants was actually still in town and came home to discover the fire around 1 AM and call 911.

After developing probable cause to link the suspects to this burglary and arson, all 3 were charged with Arson of Occupied Structure, Burglary, Property Damage and Theft. Dawson and Meyer were already in-custody on unrelated charges and additionally charged on August 10, 2017. Both are held without bond. Stockwell was located during a traffic stop in Cottonwood on August 28, 2017, arrested and booked into the Camp Verde Detention Center. He remains in-custody on a $25,000 bond.

Detectives are working leads obtained since the investigation began on May, 27, 2013. As part of their follow-up, detectives are attempting to identify and/or locate 2 suspicious vehicles seen at the residence sometime after midnight on May 27, 2013. At one point, witnesses saw one of the two vehicles drive away from the home on Deserama Circle, then return a few moments later to rejoin the other vehicle still parked at the home. A short time later, both vehicles left the area and soon afterward the fire trucks arrived.

If anyone has information regarding these vehicles, please contact Detective Todd Swaim at 928-567-7710, or you may report information anonymously to Yavapai Silent Witness at 1800-932-3232. Callers to Silent Witness are eligible for a cash reward if an arrest is made as a result of the tip. Refer to case no. 13-017378. 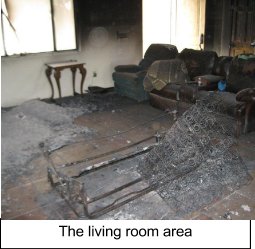 Issued May 28, 2013 – PRELIMINARY INFORMATION – On May 27, 2013, Yavapai County Sheriff’s Office deputies were dispatched to a home the 1900 block of Deserama Circle, in the Cottonwood Verde Villages, regarding a suspicious fire investigation. The home is normally occupied by 3 roommates, 2 of whom were out of town. The 3rd roommate had returned home about 1 AM on May 27th to find the house filled with smoke. Fire officials extinguished the blaze and determined the cause was likely arson related. YCSO detectives are currently working with fire investigators and reviewing evidence. No suspects have been identified at this time. Much of the home was destroyed as a result of the fire.

During the investigation, it was discovered several electronic items had been stolen from the home. The items include an Xbox and two PlayStation brand gaming consoles, along with a flat screen TV.

The burglary and arson occurred sometime between the hours of 8 PM on Sunday, May 26, 2013, and 1 AM the following morning when the roommate returned home.

Detectives are seeking information from the public to assist in identifying a suspect or suspects in this case. Please contact Detective Todd Swaim at 928-567-7710, or you may report information anonymously to Yavapai Silent Witness at 1800-932-3232. Callers to Silent Witness are eligible for a cash reward if an arrest is made as a result of the tip. Refer to case no. 13-017378.