Two in Custody following Pursuit from Ash Fork to Williams

One Suspect Fired shots at Civilians and a Deputy

At the time of the traffic stop in Ash Fork, 3 persons were inside the vehicle. Suspect Freeman was driving, suspect Eads was the rear passenger and a 3rd adult male, who escaped at the initial traffic stop, was seated in the front passenger seat.

The vehicle pulled to the side of the road and stopped. As the deputy approached the driver, later identified as 31-year-old John Freeman, he began to speed away. The front side passenger door then opened and the passenger tried to jump out, but got tangled in the door and was dragged by the moving vehicle as it accelerated.  The vehicle then stopped again and this passenger was able to free himself and roll onto the shoulder of the highway. The subject vehicle then sped away. The passenger sustained serious injuries and was hospitalized.

While continuing driving eastbound on I-40 at high speed, Freeman fired a handgun out the passenger side window striking the driver’s side body of a motorhome which was also eastbound on I-40. The projectile was later recovered from the motorhome. The K9 deputy caught up to the suspect vehicle and continued following it with lights and siren activated. The vehicle continued to flee at speeds between 100 and 120 mph on east I40. 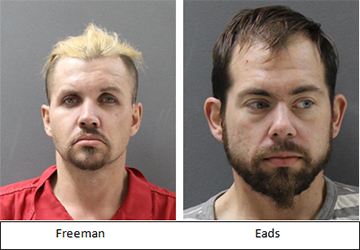 The vehicle entered the Williams area at over 100 mph when the engine appeared to malfunction and began spewing white smoke. At exit 165, the vehicle exited and turned right onto Highway 66. As Freeman negotiated the right turn, he tried to jump from the still moving car and got caught in the door frame. Freeman was dragged by the vehicle down an embankment and crashed into a tree. Freeman then freed himself and began to run into the woods. At the same time, the rear seat passenger, later identified as 30-year-old Gideon Eads, climbed out the rear passenger side door and also began to run. When Freeman was crossing a wire fence near the crash site, he discharged a firearm into the ground. As he continued to run into the woods, Freeman turned toward the K9 deputy and fired another round at the deputy. Eads was caught within minutes of the crash and Freeman was apprehended several hours later after an intensive search involving YCSO deputies and multiple assisting agencies including the Coconino County Sheriff’s Office and the Department of Public Safety.

The subject vehicle was subsequently determined stolen from Kingman, Arizona, and displayed fictitious plates.  A search of the stolen vehicle revealed glass pipe drug paraphernalia in the trunk.

Freeman later admitted knowing the Kia he was driving was stolen, discharging the weapon out the passenger side window of the moving vehicle, and possession of pipes he used to smoke methamphetamines. Freeman has a previous felony conviction from Oregon for vehicle theft and a warrant for drug related charges out of Kingman, AZ. After apprehension, Freeman voluntarily led deputies to where he had hidden the gun. The gun was recovered.

In an interview, Eads, the rear seat passenger, described the efforts of the front seat passenger attempting to get out of the vehicle and being dragged by the car as Freeman accelerated away. Eads also confirmed that Freeman fired a shot out the passenger front window of the moving vehicle, and described witnessing Freeman turn and fire one shot at the deputy. Eads claimed he was in fear for his life due to Freeman’s actions.

Eads was booked for a single charge of Vehicle Theft and remains in the Camp Verde Detention Center. Bond will be set later this afternoon.

The front seat passenger, who was able to escape from the vehicle during the initial traffic stop, was not charged. Initial reports indicate he had simply hitched a ride with Freeman and Eads.

YCSO again thanks all the assisting law enforcement agencies who aided in the search effort. We would also like to thank the staff of Bearizona and it’s patrons for their cooperation throughout the incident.