Today’s Photo from Ted Grussing Photography:
A good start to the week…

… finished numerous projects that have been trying to get my attention for months, and late afternoon headed down to Phoenix for dinner with friends I have not seen for a few years.  I guess traffic was heavy going to the original destination in Scottsdale so Melissa, did a search on her iPhone for restaurants in an area close to where we all might be, called me and we ended up with a pretty funky choice, to wit Chino Bandido on N 19th Av in Phoenix which is a restaurant serving combination Chinese/Mexican dishes and the food was really excellent and very different. None of us had ever been there, the ambiance is not exactly what you think of in a restaurant … but it was fun, clean  and once into conversation and great food who really cares. Check it out at: http://chinobandido.com/ .  And in their words you can get “Takee Outee” Too funny! Not far off I-17 so I will be going back. 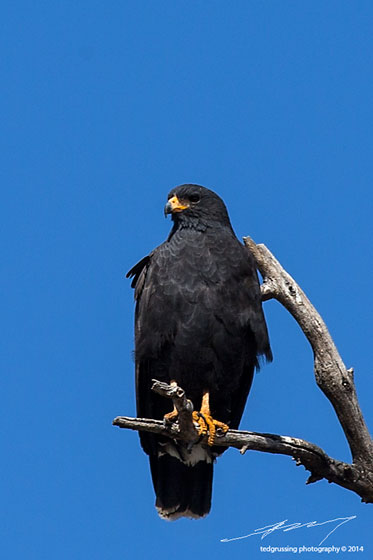 One was happy to see me open the garage door and as always it is good to be home. Winding up a few more projects today including finishing several gemstones I started cutting a long time ago and it is now their time. Other than the old photo project most everything is current and that will progress fitfully until I finish it someday. Time for all the new projects to begin. Put 12 more LED lights in yesterday and another 17 on the way. If you decide to give them a try I would suggest getting bulbs that have a color rating between 2700 and 3200 degrees Kelvin. I have found the Sunsun lights available on http://Newegg.com are good and fairly priced and they have a “65W” flood that is 2700 K,  incandescent bulbs are also 2700K so you will not notice much if any difference except in the electric bill.

Have a very good day and I think this Common Black Hawk I shot at the ponds on Sunday is looking for something more basic on the luncheon menu than Chinese/Mexican … still, you never know :+)

Share a smile or two and the joy that resides within you.

PS thanks to everyone who told me the last one was a White Breasted Nuthatch … I will let him know the next time we meet … everyone should know who and what they are :+)