Today’s Photo from Ted Grussing Photography:
X-Factor … being there

… I captured this Osprey; he was beginning a major power stroke of his wings as he said good bye to us and moved on to a place he could hunt without interruptions from guys who pointed cameras with long lenses at him. The water levels were way down, as they are now … same number of fish in a substantially smaller body/volume of water makes for more fish per cubic foot of water and that means better hunting.

The water levels are down substantially … about 36 feet from early spring levels, but they are coming up and by mid February they should be near last years levels even if they reduce the amount of water we get from the Colorado River. I think we are supposed to receive 16% less, but that would still mean the lake goes up by another 30′ +/-.

A friend sent me a link to a fascinating article titled: The United Watershed States of America: A Biography of John Wesley Powell, the famed explorer/geologist and second head of the USGS in the late 1800’s. The article is by Brandon Letsinger . The article deals with the concept of defining the western states using the boundaries of the watersheds that defined the geographic areas contained within the new state. He reasoned that because the climate of the west was very dry that the areas within a particular watershed area such as the Colorado River Basin, would be able to allocate resources within their own state and not look to other states for allocations which would lead to litigation between states and other parties.

His ideas were not popular with the establishment and studies and researchers which do not comport with the views of those who fund them have a way of losing the funding going forward … so in 1890, Congress cut off all funding of the irrigation study and survey of the west. What a different place this might have been … hundreds of billions of dollars have been spent in litigating and negotiating agreements between states and various corporations and other entities over water rights. Read the article, it only takes 12 minutes … I learned things I never knew before.

A quick trip up to the San Francisco Peaks and cruising at 11,321′ MSL, about 1300′ below Humphreys Peak, which at 12,637 is the highest peak in Arizona. Snow Bowl is on the right side of the peaks below Agassiz Peak which is in the clouds and the aspen were in good color. A beautiful fall day from a year now past. 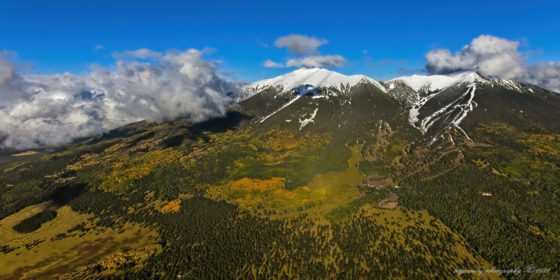 Into a new week and day one has started … have a beautiful day … smile and share the joy you find in life.

Come you who are weary, and sit in the shadow of my faith; and when you are rested we shall journey together, singing gleefully on the highway, lending many a hand, yet passing ever on and on; and at nightfall, tired and content, we shall light the candles in the house of love, thank God in cheerful words, and lie down to peaceful sleep.
Come, You Who Are Weary by Max Ehrmann