Today’s Photo from Ted Grussing Photography:
They got it wrong … proof thereof

… for as long as I can recall the colorful spots in the clouds on either side of the sun have been called ‘Sun Dogs” and that just isn’t the case … whilst One and I were outside this afternoon, she ducked around the corner and I went looking for her … I glanced up and there she was warming herself up with a wee bit of sun in the clouds … not a chance you can call it a “Sun Dog” … perhaps “Sun One” or “Sun Cat”, but definitely not “Sun Dog”!!! One rules!!! 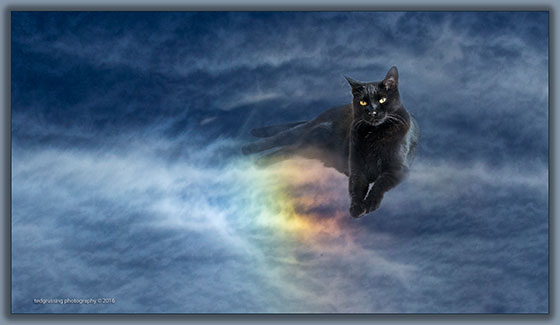 A good day and much accomplished, a Walmart run, a shoot at the ponds and the ISO 100 group over tonight. Thinking about a flight late morning and get some close up snow shots at the peaks. First some rest, espresso in a while, exercises and rower and then another day will be underway.

Have a beautiful day … give thanks for the day and that you are here living it.

TaO
(Ted and One)