Since the Slide fire started there have been so many different theories as to what went right and what went wrong and the USFS could have done this, should have done that and well you get the picture. So I thought this would be a good time to put out the real story. I have been talking with my friend Brian Steinhardt who is the Zone Fire Manager, Verde Valley Center, Red Rock and Verde Ranger Districts and the Coconino and Prescott National Forests. And much of what follows is in his words and should clarify most questions that you have about the fire and the response to it. I am providing the photos to illustrate what he is saying; it is one thing to say narrow steep canyons and another to see them … so the rest of this missive is a combination of word and image to show you the what, why and how. 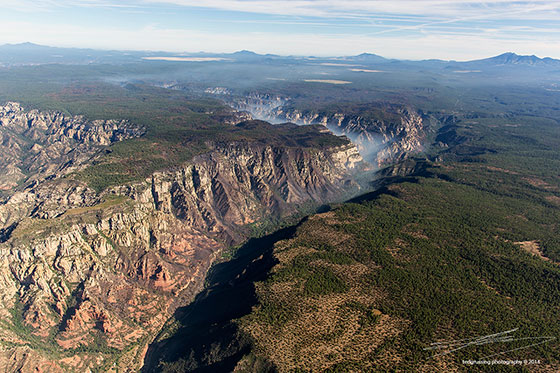 Ted: “First I have repeatedly heard that once the fire was reported first responders did not effectively engage the fire while still small. Also that aerial tankers were available and did not come in. To re-vision what it looked like check back on the early photos I sent out which show this canyon boiling with dense smoke going up thousands of feet into the air. To be effective retardants and water have to be dropped low altitude … picture a DC-10 tanker flying up Oak Creek Canyon a hundred feet off the deck with canyon walls more than a thousand feet above them … picture it in zero visibility … picture it in West Fork.”

Brian: “As for not much being done and being able to pump from the creek….Well that is one school of thought, but as I was the third or fourth resource on scene I can tell you that there was no way to make an attack on the fire immediately.  The fire was firmly established on the west side of the creek with the only access being down the cliff-like slope between Slide Rock and Halfway picnic area.  To make an attack through that, having to cross the creek, we would have hurt someone.  Furthermore, within 15 minutes it had jumped the creek and was bumping the road which means had we sent someone in that direction, we likely would have killed them.  Access from the south through slide rock was not feasible as the flaming front was very active moving to the south and engines could not get there…..people would have been on foot with no way to escape the fire if it had made a major run.   I accessed the fire from the north through Garland’s property and at that time it was easily 40-50 acres and running up the slope through the chaparral with lateral movement up canyon towards Garland’s.  It burned through the raspberry bushes adjacent to the creek as it worked its way towards Garlands….indicative of a hot fire as it barely slowed coming through.

Due to the narrowness of the canyon and the high winds, air tankers were not feasible in the attack.  There is not enough room to maneuver something like that in there.  Also, environmental constraints prohibit us from dropping retardant in waterways….especially Oak Creek.

The Type 1 helicopter that responded that afternoon (Boeing 234 Vertol) was indeed being effective in slowing fire spread, but when a chip light went off, he had to return to Prescott for mechanical inspection.  The smaller type 3 helicopter (A-Star), while not as effective was still doing a decent job but the smoke column laid over the head of the fire and he could no longer drop on the head due to visibility.  At that point all his effort was to the south and east sides.

And yes, retardant and water drops are made from low altitude.  Air tankers typically drop about 100-150’ above ground level or tallest vegetation while helicopters can come in lower due to maneuverability. “

Ted: ”A comment on low altitude flying … One of the helicopters had a bird strike taking out the left seat windscreen and another helicopter had a rotor blade strike on a tree; both made it back.”

The first photo [above] shows Oak Creek Canyon form just below Slide Rock State Park and you can see where the fire went up the west side of the canyon most of the way up to West Fork where the smoke is heavier. Going up Oak Creek Canyon on the right side you can see the switch backs where SR 89A comes up out of the canyon. Following the smoke to the left going in to West Fork the canyon narrows dramatically and the canyons are deep and twisty (spell check says that is a word). On the lower left reaches of this photograph, up and over the canyon wall on the left side (West) is Long Canyon. On the right side above the switch backs a little way is Forest Highlands and other populated areas.

Ted: “I have heard that the USFS was using this fire as an opportunity to manage the fire and burn thousands of acres of forest which would otherwise have been scheduled for prescribed burning … any truth to that”?

Brian: “Just for clarification, there was no intent to manage this fire for resource benefit.  Being a human caused fire and deemed unwanted, the management decision from the time it began was full control/suppression.  Due to the topography and the distance the fire had spotted the first day/night we were there, the only option we had was to make a big box and corral it inside the box.  Unfortunately, this increased the size of the fire and the area burned, but with no other way to safely fight the fire in the terrain and fuels it was established in, we made the decision to engage the fire on our terms, in areas that we could safely do so.  Hope this helps, and I too am pleased with the effects from firefighters being conscientious about burning out control lines back to the main fire and treating the land with the utmost care and respect”.

Ted: “I have also heard that the losses in the Yarnell Fire may have influenced decision making re where to engage … any truth in this”?

Brian: “Decisions on where and how to engage the fire have happened long before the Yarnell tragedy.    How and where are the basic tenants of firefighting.  Firefighter and public safety is the first priority of any fire so we continually assess the situation and determine the best course of action based on current and expected fire behavior, along with weather, topography and fuels conditions.  When a fire like the Slide fire gets established like it did, our best option is go defensive, evacuate the public and protect the structures.  Then we can figure out how to corral the fire…i.e., burning out from control lines in front of the fire to rob it of the fuel it needs to continue to spot and burn”.

The second photo is a shot down into West Fork near the entrance from Oak Creek Canyon. This will give you an idea as to how incredibly rugged the terrain is. You should also be pleased to see so many trees still looking good and so  little damage. During the fire this canyon was dense smoke from the floor to more than fifteen thousand feet … visibility probably less than fifty feet. 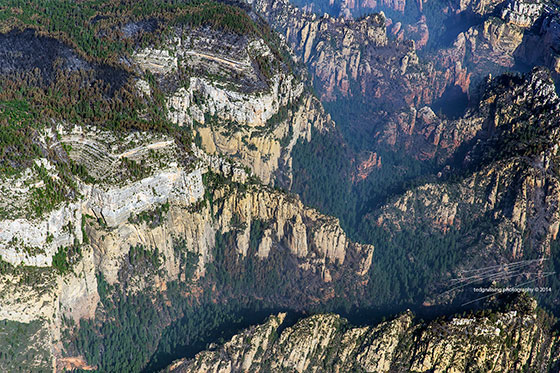 The third photo is a look back to West Fork and Oak Creek Canyon from the upper reaches of Sycamore Canyon . You are looking ESE. The dense smoke is filling the various nooks and crannies of West Fork … please note the generally beautiful condition of the forest on the plateau. For further reference above right center is Wilson Mountain, Thunder Mountain, West Sedona and the airport Think I see Bell Rock and the Village of Oak Creek too. 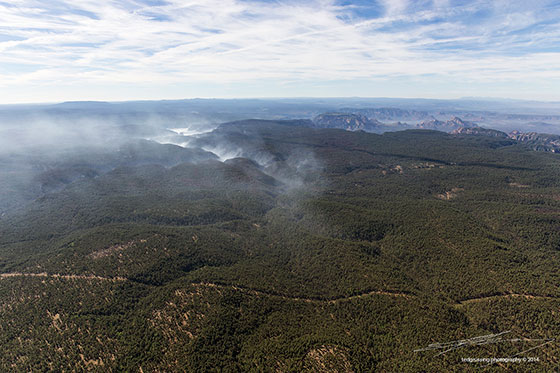 All photos were shot Monday June 2, 2014. The smoke is expected to continue for a couple of months as it smolders in unreachable areas.

Time for a wrap as I will be in the air again early tomorrow morning … Thank you Brian and thanks to the incredible team assembled to take care of this and every other fire!

Cheers … share a smile, especially when you consider all the great people like Brian who are out there making our lives safer and the forest healthier.