… as this male Black Hawk left the branch you witness the exact moment where flight began and with the powerful thrust with the wings he was off to parts that we could not follow. Near the end of the afternoon we came on a breeding pair of Black Hawks that were perched on a branch of a tree on one of the new islands in Lake Pleasant. The water level was up again today and we could reach deeper into the inlets and in and around new islands formed by the rising waters. Got a couple hundred shots of this pair and will be keeping a lot of them; they let us get within 25 feet and did not fly for about five minutes. 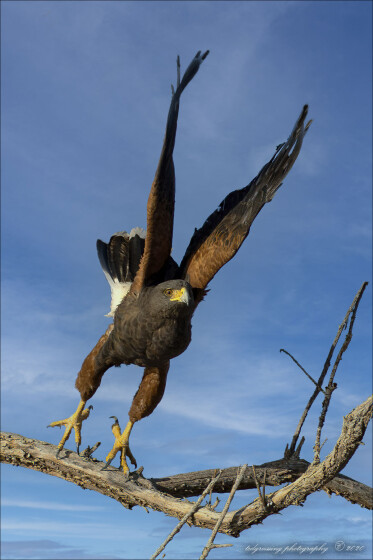 Got some other shots today that were amazing … not much the first three hours on the lake, but as the afternoon was fading, the level of activity picked up and so did the quality of the subject matter of the images. More to follow and tomorrow evening the Christmas letter and images go out.

Have a terrific day and let yourself be amazed by all the beauty that surrounds us.

Give me to gladly go
My way and say
No word of mine own woe;
But let me smile each day.
— Max Ehrmann