… there is more than one way to surf and the Pelicans are among the best when it comes to running ridge lift on the face of waves as the air is pushed forward and up, they park themselves in the beautiful band of lift and cruise making gentle control movements with their wings and primary feathers to maintain lift and control. I got this shot on Friday somewhere along the coast south of Half Moon Bay … around Pigeon Point Lighthouse I think. 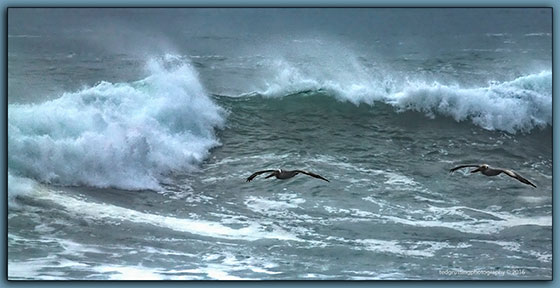 The photo I sent out last night was actually taken on Saturday, not Sunday … Sunday was a travel day and it made the flight out with “never cover your mouth and cough all the time person” seem like a true delight. My seatmate on this flight was stoned out of her mind with pharmaceuticals and alcohol … minor disruptions like pounding her head on the seat in front of her, emotional outbursts, crying and last but not least getting sick. The flight attendants extricated her from the seat next to me and placed/stuffed her in the rear restroom about thirty minutes before landing and we all had to wait in our seats after landing so that the Phoenix EMT’s could get her off the plane … kinda sad really.

GOOD TO BE HOME!!! No more air travel until May and June. Driving over to LA and Malibu with a likely side trip up the coast in April.

Deleted approximately 1200 photos today and have 701 left … tomorrow I hope to get it down to around 250 images. The more I get used to shooting water the fewer initial shots I’ll take, but since the coast is not close, I wanted to make sure I tried a bunch of different settings and setups to see what worked best for me. Then too the surf was up on Saturday and the sun was out.  We did the Seventeen Mile drive around Pebble Beach and it was absolutely beautiful. Tomorrow it will be straight water that goes out … just couldn’t take a pass on the Pelican shot.

Have a beautiful day and keep a smile going; it will light you up inside as well as outside and who knows how many people will have a better day because of it.

Cheers … be careful who your seatmates are :+)

…I yield myself to the thousand enchantments of sky and field and wood,
and play again like a child on the soft green of the earth.
— Max Ehrmann